Gonzalo Rubalcaba (born May 27, 1963 in Havana, Cuba) is a Grammy Award-winning Cuban jazz pianist and composer. He has received 14 Grammy nominations (wining 2 Grammys for Nocturne and Land of the Sun, and 2 Latin Grammys for Solo and Supernova) including four for Jazz Album of the Year (Rapsodia in 1995, Antiguo and Inner Voyage in 1999, and Supernova in 2002), the Palme d’Or from the Music Academy in Paris in 1991 and two “Best Performer” awards for “Suite 4y20” and “Rapsodia” in 1992 and 1993 respectively. In 2008, Gonzalo was awarded the “Vanguard Award” by The ASCAP Foundation for “charting new directions in Jazz”.

In 1986 he had a chance meeting in Havana with bassist Charlie Haden. Through Charlie Haden he came to the attention of Bruce Lundvall president of Blue Note Records, and thus began an association, first with Toshiba/EMI of Japan, and later with Blue Note in the US, which has resulted in the release of eleven albums. Due to his record releases and popularity with the Japanese ctizens he has had countless performances in Japan. When he heard about the earthquakes and the tsunami he along with other musicans became concerned about his Japanese friends and fans.  Through his concern he sends the above message in Spanish (read the English translation below).

Gonzalo is continuing his tributes and love for music in his current aspirations.

In 2010, Gonzalo founded his own record label entitled 5Passion with music enthusiast Gary Galimidi. He released his first independent offering on the label entitled “Fé” in November 2010. Gonzalo is presently preparing to record a Trio Album featuring Matt Brewer on Bass and Marcus Gilmore on drums, with special guests: Lionel Leouke on guitar and Pedro Martinez on congas. Their recording session is currently being held at MICHIKO STUDIOS, a renwowned rehearsal studio in Midtown Manahatten NY.  The sessions will be filmed by Toronto based video producer of Original Spin in co-operation with 5Passion for eventual DVD/BluRay release in late 2011. Gonzalo continues to tour the world as a solo pianist, and as band leader. 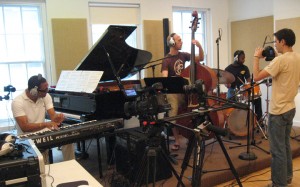 The recent events in Japan have cast a somber shadow over my spirit. My heart is heavy, and my thoughts are with all of you.  As I look back on the wonderful adventure I have lived among you, I am reminded of what I have learned from you, the people of Japan.

I have learned that we are the temple of the Great Spirit, and great imagination and opportunity abides within us. With the acceptance of which we are, with the awareness of the problems at hand, and with a commitment not only to ourselves but also to each other, we can and will triumph over any challenge. The rewards for those that persevere far exceed the pain that must precede the victory.

I have dedicated this performance of Imagine to you, the great people of Japan, and will pray for your quick recovery.