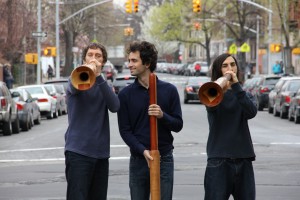 Didge Project, a didgeridoo awareness organization, was founded by AJ BLOCK and Tyler Sussman who left California in the summer of 2008 to challenge themselves and see the world outside of their hometown. Both were originally jazz musicians but when they encountered the didgeridoo somewhere on their trip, AJ and Tyler were transformed by the sounds of this ancient Australian instrument. They found out that the didgeridoo with its emphasis on breath and circular breathing was not just an instrument to play with but also a way of life, a path to self-knowing and self-healing. Short after arriving in NY they founded Didge Project as the head organization of many didgeridoo related projects. It has since evolved into a larger community and movement. Towards the end of 2010, the duo was introduced to drummer Chaim Tolwin. They produced two albums and performed and taught at numerous venues and festivals. Through their music, workshops and collaborations with a number of wellness practitioners and yoga teachers, they intend to build a community that connects people all around the world through the universal language of sound. AJ and Tyler currently live in Brooklyn, NY.

In the video below Didge Project perform Joga which was written by Tyler after performing in Costa Rica with Brazilian musicians in 2010. “The swift samba beats anchored by the rock steady didge pushes the flute to fly high in this playful tune.” Featuring AJ Block on didgeridoo, Tyler Sussman on flute and Chaim Tolwin on drums.”

Didge Project’s new album, “As One” is coming out November 9, 2011. They are using Kickstarter to fund the production of the CD.