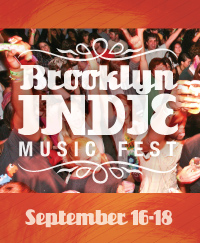 The Brooklyn Independent Music Fest took place at Littlefields in Brooklyn, near Gowanus, and for 3 days over 60 bands took to the two small stages to showcase a hell of a lot of pop,blues, soul, rap, and old timey music. This matches the borough’s return to oyster bars, tile floor restaurants, brick oven pizza shops, and speakeasy-looking venues that sell absinthe. With this festival though, the old and the new vaguely mixed on the stages, followed each other, and generally, what the promoters were going for, was a complete celebration of all the different musical elements that find their way to Brooklyn.

What’s really interesting, and highlighted by the music represented in this festival, is that Brooklyn iscontinually changing, as is all of New York, and that the hundreds of bands that make their way tothis place, each have their own take on what it means to be in Brooklyn. Thousands of styles flourish,niches are filled, clicks formed, you end up with rap, rock, electroclash, soul, funk and more, all side by side,and at times, it all can get pulled together into a few nights of music that make sense in the diversity.

Check below for some highlights of this festival………..

The Ramblers rambling like an ’80s update on Creedence…

Kimberly Nichole, soulful, Amy Winehouse-esque, with barking (“Aint nothing but a hounddog..”)

Mother Feather, get happier with this here, pop….