This week the Portuguese Gypsy Duende dancer, choreographer, educator and dance producer Carolina Fonseca is joined by SoSaLa‘s Sinan Gundogdu who is not just an oud player but also a very talented guitarist. 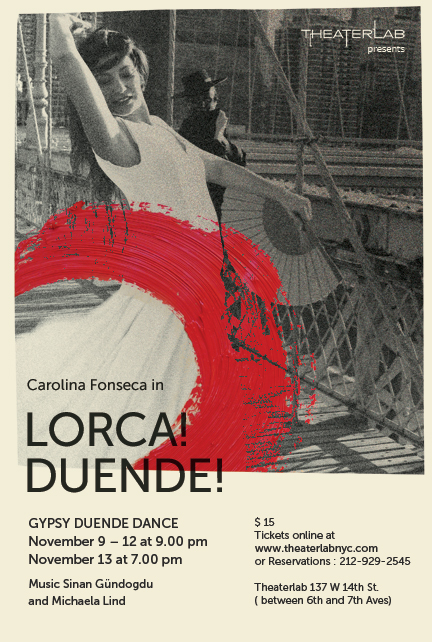 Born in Lisbon, Carolina was initiated at acrobatic and rhythmic gymnastics at the age of five before she joined Arts School ARCO six years later. She has been teaching Danza Duende since the year 2000 in Milan, Bologna, Madrid, Barcelona, Seville, Ljubljana, Berlin, Cork, Lisbon and Porto, among other places. At present, Carolina is a member of Salamantras – Danza Duende Company, directed by Myriam Szabo, as well as of Pálinka – Romany Dance Company, directed by Mónica Roncon.

She started her research on Romany dances with Myriam Szabo and later complemented her training with Ukrainian Pétia Lourtchenko, particularly in Russian and Central European Romany dances. She also studied in India, in the Rajasthan area, as well as in Transylvania, Budapest and Istanbul, where she was in direct contact with century old Romany families and great music and dance masters. Also within this sphere, she has performed as a dancer with Fanfare Ciocarlia, Taraf de Haïdouks and Roby Lakatos.

Carolina lived in Brussels between 2005 and 2008, where she studied and taught Danza Duende as Myriam Szabo’s assistant and deepened her ballet and contemporary dance studies with renowned teachers. She worked with the great Japanese master, Masato Matsuura, in Nô Theatre and performed, as a soloist dancer, in Molière’s play ”Les Fourberies de Scapin”, at the Martyr’s Theatre (2007). At present, Carolina lives in Lisbon, her home town.