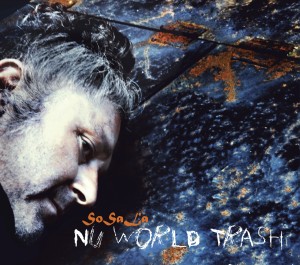 Nu World Trash is the first album by SoSaLa, the latest project of saxophonist Sohrab Saadat Ladjevardi, formerly of TEHRAN-DAKAR BROTHERS axis. Recorded over the last 3 years in Brooklyn, it features a wide array of musicians, including Alejandro Castellano on guitar, Derek Nievergelt and Damon Banks on bass, Swiss Chris on drums, Kurt Dahlke on electronics, “Indofunk” Satish on the Firebird electric trumpet, Mar Gueye on sabar, Massamba Diop on tama (talking drum), Ladell Mclin on guitar, Piruz Partow on electric tar, and Sylvain Leroux on tamblin (or fula flute). Mr. Ladjevardi plays tenor sax and supplies the voice for the spoken word parts, and wrote most of the music on the album.

Overall, Nu World Trash draws from many traditions; one can hear elements of rock, jazz, Persian music, Jajouka, and other influences as well. Most of the pieces have spoken words as well, passionately supplied by Mr. Ladjevardi. Some of the words are in English, and many are in Farsi; numerous times I found myself wishing that I was fluent in the latter tongue. While such an wide array of styles can sometimes lead to an incoherent whole, this is definitely not the case here.

The album opens with “Ja-Jou-Ka” (a nod to the Jajouka musical tradition of North Africa), which starts out with trumpet and drum. Soon, they are joined in conversation by Sohrab’s saxophone, sounding mostly Persian, with jazzy inflections. Then the song takes on a marching feel in 3, which gets free and stormy over time, but stays communicative. Passionate spoken (almost shouted) words in Farsi and English are added to the mix by Sohrab, and then the march re-emerges, develops a little, slows, and ends while still feeling stormy.

Up next is “Nu Persian Flamenco,” which opens with soulful saxophone over electric tar (a Persian lute-like instrument). Sohrab exclaims, “stand up and let beauty dance!” And the rhythm section enters. The song is soon propelled by a driving bass, with more spoken words on top and tar right underneath; then the saxophone comes in over an insistent rhythm. The song ends with an emphatic “let beauty dance” and a fade.

Song number 3, “Welcome New Iran,” is one of the highlights of the album. It opens with gentle flute and guitar, and Sohrab soon comes in with spoken word over saxophone, with a crowd chanting underneath (the chants are pulled from real videos of Iran’s 2009 Green Revolution, available at http://www.sohrab.info/. Soon a rhythm establishes itself, over which Sohrab chants and sings, with roaring crowd sounds and occasional saxophone commentary. This all evolves into a lovely Iranian melody over a driving, almost Persian-rock fusion rhythm; and then a mix of Green Revolution sounds, spoken syllables, flute, and saxophone commentary before gently coming down. This is a very passionate track, and Sohrab’s strong support and passion for positive change in Iran are expressed very strongly by the entirety of the song.

Up next is “Khorasan,” a traditional Persian piece arranged by our composer. It begins with tar, and then energizes into a rock beat with a Persian-sounding melody. The piece rocks up, while Sohrab shouts homage to Khorasan in English. By this point, the guitarist is sounding almost like avant-banjoist extraordinaire Brandon Seabrook. The piece then slows down, and takes on a marching rhythm with a rocking bass; the rhythm shifts to a funkier beat, and ends with a suitable flourish.

“Vatan Kojai?” begins with slow tar and saxophone, and the word “boums” repeated. A beat starts, and then a spoken, philosophical musing on the early part of the cycle of life. The music gets more intense, the instruments come in one after the other, and we return to the “boums” chant at the end.

Track number 6 is the humorous “April Fool’s Day,” and starts out with some out saxophone-flute interplay, and the chant “You can’t take it seriously!” Repeated over Persian-sounding sax, flute, and drums. The rest of the band comes in, with a rock rhythm in 3, and a layer of spoken words, laughing, and crying over the instruments. The spoken words begin to enunciate contradictions, for example, “Show your beauty! Show your ugliness!” The music gets more chaotic, speeds, up, and ends by melting; appropriate for a song entitled “April Fool’s Day.”

Next, “NY’s Sa-Si-Su-Se-So,” begins with the instruments playing a balkan sound in unison, followed by sax soloing. Spoken Farsi words, with F/X come in on top, and by the time the song ends, the strings have taken the lead.

“Sad Sake” begins with some words that sound like they’re being spoken through a subway station loudspeaker, followed by the emergence of a slow, minor-key Persian melody, augmented by a falsetto voice. Then the drums bring in a complex rhythm, which sounds both duple and triple at the same time, with the saxophone and other winds adding textures. All of a sudden, the instruments drop out, leaving only whispering. Shortly thereafter, the instruments reemerge, with bass notes adding a sparse structure, before the song ends.

The final track, “Everyday Blues,” opens with a jazzy trumpet, and a series of “Every Day…” vocal statements; these are soon joined by an interplay between drums, bluesy/jazzy horns, and funky bass. The “Every Day” spoken variations, and the music and words become increasingly desperate. An electric guitar joins the interplay, and the song ends abruptly on a bluesy riff.

Overall, I found Nu World Trash to be a very compelling and original work. The fusion of very disparate musical traditions always has the potential for muddiness and chaos, but the various elements are brought together very well by the outstanding musicians under the leadership of Mr. Ladjevardi, and the songs themselves are well-written. However, even more notable is the passion and energy which shine through nearly every moment of the album; one can almost feel physically Mr. Ladjevardi’s desire for a just and prosperous new Iran, one which uplifts all of its diverse citizens. You will not hear many albums more interesting or heartfelt than Nu World Trash.