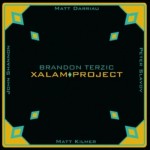 Earthy notes spill from an oud, like raindrops on ancient wood. A saxophone seeks out an exotic note somewhere between an equally tempered E and an Eb, and seduces it into a counter melody. The two voices converse, sharing each other’s ideas and passions. Percussions hang ornaments in the air, and the bass reaches under this dancing visceral language between two cultures, and lifts it into flight. Eventually, the oud asserts itself and makes a final statement.

“Xalam” is a Wolof word for a West African string instrument that  is believed by some to date back to ancient Egypt, and may be an ancestor to the American banjo. Terzic’s use of the word evokes a connection with ancient traditions and brings them into a contemporary setting. In fact, many of the tracks have a distinctly African vibe; such as “Fode” with its unmistakable West African Manding flavor, the hypnotic undertow of “Butterfly,” or the joyfully Madagascar drenched “Morengy.” One would think that being an American who plays the oud he would be married to the Persian / Arab tradition (which, by the way, is also noticeable in his music, as in the track “Taxsim Skura”). This is not the case. Terzic navigates his way freely between different cultures, paying homage to each without being overshadowed by any.

This is all well in keeping with Terzic’s mindset, considering his upbringing. After having been exposed to the music of Jimi Hendrix by his father, Terzic began playing guitar with local rock bands. Abandoning this to travel, he lived a nomadic life in Europe for a time, and settled in New York City where he studied guitar with Mordy Furber and Dave Fiuscznski. Later, while traveling in Israel, Egypt, and Cyprus, he embraced the oud. Returning to New York City, he established himself with the local scene, playing with the likes of Hassan Haoukman, Max ZT, Tomchess, and Sylvian Leroix.

New York City boasts of a rich neo-world underground music scene that the rest of the world would do well to embrace. Xalam Project is one of the jewels in this crown.