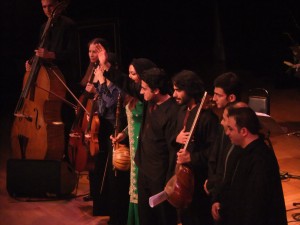 The inspiring combination of the young talents in the Hesar Ensemble and that of Homayoun Shajarian lifted the spirits on a cold New York  night at Town Hall. Alireza Ghamsari’s compositions and Homayoun Shajarian’s  vocal capacity had shown their considerable compatibility over the past few years through the release of records such as Naghshe Khial (2005) and Aab,  Naan, Aavaz (2008), selections of both of which were a staple of this concert.

Divided into two parts, the night began with an introduction from the “Aab, Naan, Aavaz” album in the mode of Chahargah and was followed by the Tasnif, “Dar Asheghi” (Rumi poem). This was followed by a short solo by Homayoun Nasiri on the dammam and conga in a familiar and heart warming  southern/Persian gulf 6/8 rhythm which naturally led to the Tasnif of “Aab, Naan, Aavaz” from the same album (Shafi’i Kadkani poem). The elating performance of the saz o avaz “Naghshe Khial” which presents the words of Sa’di was a divine addition. The second part was concentrated more around pieces from “Naghshe Khial”, including “Gonah e Eshgh” which is a beautiful amalgamation of flamenco and Persian avaz (Sa’di poem). It is usually performed with the flamenco guitar, which was not the case here. The strings section took care of this effortlessly.

Ghamsari proved the exceptionality of his craft from a very young age. Born in 1983, in Tehran, he created the Sarmad Orchestra in 2001. Through an active presence with the ensemble, Ghamsari earned first ranking in the “jashnvareye Musighie Javan” (The Youth Music Festival) in Iran. He has pursued music from a refreshingly polyphonic and rhythmically complex perspective. What made this night’s  performance in New York’s Town Hall special was not only the pleasure of listening to the vastly layered nature of his pieces, but also the capability of a fierce ensemble that have obviously taken the satisfying  challenge of playing Ghamsari’s music and made it seem effortless. Hossein  Rezaee Nia on daf and Persian dayereh; Homayoun Nasiri on dammam, conga, Tibetan bells, and udu; Aeen Meshkatian on tombak and udu; Negar Kharkan on kamancheh (spiked fiddle), and Layla Etemadi on viola accompanied Ali Ghamsari (on tar) and Homayoun Shajarian (vocals). Two talented musicians also added a tremendous fullness to the sound of the night on the cello and upright bass. Ghamsari’s inspiration for these fuller and more diverse sounds is obvious in his creation of the Kaman String Quartet in Iran which utilizes an alto kamancheh, an inspiring demonstration of the evolution of musical instruments  in Iran.

Unfortunately, the names of the two seemingly local musicians were not announced and there were no programs supplied to the audience in which such information could be found. Last but not least, instead of the song always guaranteed to be heard as an encore by one of the Shajarian’s “Morgh e Sahar”, the ensemble offered a new  perspective on Rumi’s well known poem “bihamegan be sar shaved”, and left the stage graciously while Shajarian offered the dozen red roses gifted to him by a fan to the entire audience and left it down stage. Much excitement is provoked by such capable young talents coming from humble origins. Only an awe-inspiring progress towards further heights can be expected. The ensemble had four more concerts in Chicago, Los Angeles, Berkley, and in Houston today.