The idea of blending two different cultural influences in art or music is not new. In fact, the idea has been going on for centuries. It is only now that it is so noticeable, due to the process being accelerated by communication and other technology.
A recent intriguing step in this path is the CD and tour by Anoushka Shankar; daughter of illustrious sitarist and musical ambassador Ravi Shankar. No stranger to multicultural experiments, Shankar has brought about an intriguing blend of Indian raga and Spanish flamenco. According to historical evidence, flamenco’s distant roots are in 9th century India. Punjabi “untouchables” fled persecution and wandered the Middle East and Asia; eventually settling in Europe. There has been, however, little speculation of the common roots of the theory of this music.

All in all, these two musical traditions have been severed over the centuries; and Anoushka Shankar has attempted to rejoin these two lost musical sibblings.  On an unseasonably warm night in New York City, I ventured to City Winery, where Shankar and her new band were performing. The packed crowd waited in anticipation for this new music. There was a very noticeable difference from the atmosphere of a classical Indian raga concert, with the loud conversations, moving around, and waiters and waitresses bustling about serving drinks and food. City Winery is a fine venue, but the contrast was noticeable to one accustomed to classical settings.  Shankar and company took the stage. She began with an interpretation of a well known classical raga “Bhiravi”. She chose this because she felt it resembles much flamenco music. Her approach was not outside the classical interpretation, except that she played no jhalla at the end. She was very conscious of the melody and carefully invoked Bhirani’s spirit.

Her band consisted of herself, guitar, shenai, flamenco vocalist, and two percussionists (who used Indian – mostly the mridangam –  and non-Indian percussion instruments, such as the cajon and cymbals.) 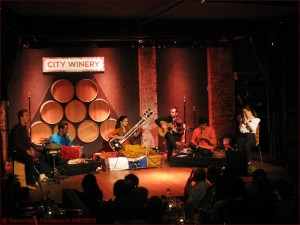 One of the technical problems she was faced with was playing duets with an equally tempered instrument. She has done this on earlier recordings, playing with a pianist. This night she would set her sitar against a guitar. Marrying these two very different types of temperaments inherent in each instrument is something few would attempt, and fewer ever pulled off. However, unlike the late Colin Wolcott of Oregon, who played sitar against harmonies that presented the ear with unprecedented musical form (and whose brilliant pioneering of non-classical sitar never got the recognition he deserved), Shankar had to bring two musical forms together that the ear is not accustomed to hearing. The interplay between instruments was delicate. It was a dangerous undertaking, which threatened at any moment to degenerate into a clashing hybrid, whose components cancelled each other out and created an artistic and aesthetic train wreck. Shankar’s sitar would sometimes search for a way to blend with a musical environment that had, for centuries, been thought impossible and incompatible. It was actually thrilling to listen as she maneuvered this delicate and volatile territory.

Shankar and company, however, managed to pull it off. They blended the essential nature of their instruments well. The best times were when the exact reference to either Indian or flamenco music was indefinable. At such moments, a true marriage between two cultures was achieved, and Shankar’s mission to rejoin the separated music was accomplished. In one piece, the shenai took a dominant role in a song that the guitar played chords in. This was yet another unexpected musical and cultural marriage; and it worked quite well. There were other times when the shenai, sitar, and guitar played counterpoint lines; something foreign to Indian music. Most of the time it sounded natural, but at times they were right on the edge of losing what they were trying to do; but never did. It always worked.

There was also a fearless exploration of the emotional spectrum of the music. With Indian raga, it is often difficult for the untrained westerner to experience the exact mood invoked in a raga. Flamenco differs from this in that its emotions are very noticeable and upfront. One of the pieces they played, which employed major 3rd and minor 2nd (as a westerner would interpret it), suggestive of an Arabic feel, began with a dark, mysterious, and almost angry feel. As it progressed, the guitar harmonies invoked a brighter, more optimistic mood; as if to dispel the darkness with a promise of the triumph of dignity and joy over suffering.

The percussionists were marvelous. Their performance was flawless, and they found absolutely no difficulty whatsoever in demolishing the barriers between the rhythmic traditions of these two musical nations. For them, evidently, there was no east or west, no India or Spain. There was only music.  Later in the set, they performed an interpretation of an old flamenco song that resembled a classical raga. Chords on the guitar set the mood, then the sitar took over. A conversation between sitar and guitar met its climax with the vocals soaring overhead, with accompaniment on guitar. The shenai took over the vocals, and the song ended on a very different mood than the song began on.

The following piece required the sitar to be retuned. While this happens often at classical raga concerts, this audience was not prepared for it. The audience actually made a lot of noise when Shankar was re-tuning; which I felt was inappropriate behavior. However, Shankar had the last laugh when a powerful sitar melody cut through the ambient noise, like a machete slicing through a jungle. The band joined this. This piece invoked the Spanish flamenco essence called “Duende,” which is difficult to translate into English. At times the mood softened. It ended on a flamenco interpretation of a teehi. 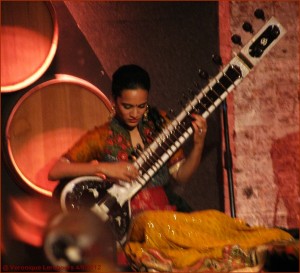 The following pieces were powerful, bold, and sublime. The performance ended on an interpretation of raga Jog; the most classical piece of the night (along with Bhairavi). The shenai had a strangely blue inspired approach to this raga; almost sounding like John Coltrane; but he never ventured outside the raga. The band played this piece to a powerful climax; teasing the audience with teehi after teehi, never giving a hint when the piece would end. Finally, it ended on a triple teehi.

The audience demanded an encore. Shankar took the stage alone, and played rag “Charukeshi” in alap. This was a real contrast to the power and excitement of the rest of the performance. The music she offered seemed to bring the audience back to its senses after such an emotional journey.  All in all, it was a fine performance, as complete and fulfilling a concert as anyone could ask for.

A few days later, I listened to the CD Traveler which this band toured to support. The overall feel of the CD was actually quite different from my memories of the performance. And this is how it should be. A recording preserves music in time; a live performance is meant to happen only once in the history of humanity. 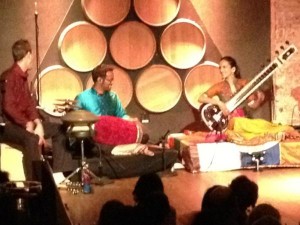 We are at a crossroad in the history of music. We are beginning to see cultures not our own, not as “The Other,” but as something we recognize within our hearts. We are slowly waking up to the reality that humanity is a single tribe manifesting as a multiplicity; and that each component of this multiplicity is essential to the greater whole. Anoushka Shankar’s performance is one voice explaining to the world that this truth can only be communicated and realized by music, art, and spirituality. These are guaranteed to succeed where politics and globalization have met, and will continue to meet with absolute and inevitable failure. Such is the value of music, and the power that musicians hold in their hands; for it is not armies and nations that are conquered by force. It is hearts won through an act of love; a power that no king, president, or prime minister can ever hope to wield.