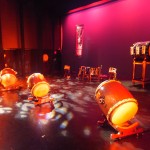 Taiko is an ancient form of Japanese drumming that most New Yorkers have no familiarity with, yet recently the Taikoza group, led by Swiss-born director Marco Lienhard, banged the big barrel-sized  taiko here among the steel and concrete skyscrapers of New York in the time-honored, Japanese, tradition of cleansing the Spring atmosphere of evil spirits through the banging of drums, dancing, and playing of flutes (shakahachi and fue), and a Japanese 13 strings instrument (koto).

To get to this show took a little trooping, you had to hit West 60th street, close to the water, at the Manhattan Movement and Arts Center; but once there and downstairs and inside, the theater presented an intimate setting for the presentation of these traditional Japanese musical forms. Taikoza, the group, has a unique history because Lienhard came to Taiko music and mastered it as an outsider, “gaijin“, in Japan, yet he was able to find his way to study with a famous drumming group in Japan, Ondekoza, known for their intense discipline and training. This group in Japan would also run marathons while on tour to maintain their purity of spirit! As a former flute player in Switzerland, he also took quite quickly to the shakahachi, the instrument which he excelled on in this performance. In 1995 he took this experience with him when formed Taikoza here in NYC. 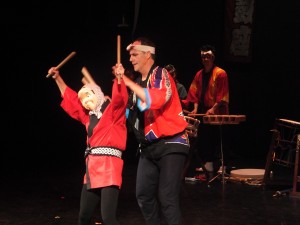 The high level of intensity suggested by such feats was definitely evident in their performance this night in New York. The Taiko, when first wheeled out onstage, looked immense when compared to what’s common in the West, reminiscent of war drums beaten on the eve of battle, and the players, all accomplished disciples of the tradition, performed their varying roles to perfection during the display. The pummeling battery of snare drums and Taiko was intense on a number of selections from the performance, reverberating deeply around the theater to the core of the audience, but the subtle adjustments to shakahachi (Japanese flute) and Koto (Japanese harp), throughout the night balanced this out, and made for a truly profound juxtaposition.

Yuki Yasuda, especially, on solo Koto, delivered a tremendous version of Tori No Yoni (Like A BIrd). While playing alone before the audience, she built the intensity of her song to a profound pitch, exhibiting a dexterity of playing worthy of  her Japanese teachers.

Taikoza, for this night only, was fortunate to be joined by Hawaii Matsuri Taiko, the first Japanese Taiko group of its kind in Hawaii. Many of its multi-ethnic members have been featured internationally, and on US television, mixing Hawaiian and Buddhist rhythms in their music.

Lienhard and Taikoza should be commended for bringing this intense and beautiful Asian music to New York, in all of its authenticity, and also for working to connect with other practitioners of this ancient tradition around the world. Not only were they able to capture the elegance and power of the songs, but through the dancing and acting portrayed in some of the compositions, they were also able to keep the spirit light, and bring a lot of smiles to the faces in the audience, many of whom were young kids. At no point did this feel like a walk through a museum, an encounter with a dead art. The energy in the room was bristling, the performers dripping in sweat, and the members of the crowd throughout the performance were ready for more, and ready to reach over and try their own hands at the big Taiko drums that were sitting idle on the stage in the few moments after the show. Lots of people took pictures and tried to grab a stick, bang a drum, and catch a bit of the vibe that was still hanging in the air, profoundly.

Please check also out a recent interview with Marco here.