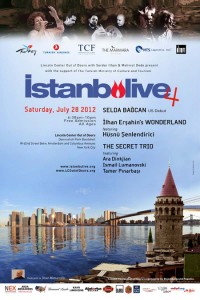 For the fourth year in a row a hardworking Turkish group of promoters and musicians have succeeded in bringing the sounds of their country right here to NYC where a large group of Turkish emigres are eager to hear music from home, and locals can hear something exotic and new. In past years, it’s happened at Central Park SummerStage, but this year they moved it to Lincoln Center’s 62nd street bandshell space. Despite a raging thunderstorm just hours before the start time, with bolts of lightning ripping through the darkened skies, the 3 groups on the bill from Turkey were able to take the stage after the storm died down when it was safe for the musicians to play.

Due to the unpredictable and inclement weather, all the bands of the night played abbreviated sets to make sure that headliner Selda Bagcan would be able to take the stage and delight the surprisingly large Turkish crowd which growed in attendance as the rains let up and the music sounded out.

The Secret Trio started the night with their classical instrumentation, and charged the air with a traditional ambiance that was Turkish, yet pulled from Balkan, Macedonian Roma, Middle Eastern, and Armenian roots. The clarinet during this set, played by Ismail Lumanovski was exquisite, and truly brought some wonder and magic to this wet New York night.

Next, Ilhan Ersahin’s Wonderland, with Hüsnü Şenlendirici on clarinet, injected jazz and experimental rhythms into their portion of the night, with incredible percussion, and a spontaneity to be expected from players exposed to the best of Turkey, Europe and the US. The bandleader, Ersahin, on sax, is also a promoter of IstanbuLive and owner of Nublu in downtown NYC. In past years this group has opened for Duman from Turkey and others, improvising wildly and craftily, but this time they held the set short out of respect for the headliner, who had travelled far and was subject to such troubling rain.

So, as it was throughout the night with rain threatening to fall, Selda Bagcan took to the stage with the wind picking up, and more dark clouds overhead. With a surprising quickness, from the moment she first spoke into the microphone, large segments of the mostly Turkish crowd reacted wildly, singing and dancing with her on most of the traditional songs that most everyone from Turkey seem to know.

In the video below  you can watch the whole festival!!!

Selda was a galvanizing figure in the 70’s and 80’s, forced to spend time outside of the country after being persecuted by the dictatorship for her outspoken views on freedom of speech. Therefore, her position with the progressive elements of Turkish society now is solid, and she is viewed as a hero of the people who know about the older ways of Turkey, and who know many of Selda’s songs from before Muslim hardliners started to play such an important and divisive role in Turkish politics.

For a lot of Westerners that were familiar with the music, or not, the energy of the night while Selda was singing was undeniable. People were dancing in the aisles, little children were kicking up their heels, and many were singing along word for word. The great thing about the many free summer music series in NYC is just that: lots of exciting music from all over the world exposed to an audience that is ready to take it all in, whether they have heard it before or not. At venues like Lincoln Center and Central Park SummerStage you get the best musicians of the world mixed with the best, most receptive audiences out there, and the final result is that exact incredible mixture of energy that might only be found here in The Big Apple.