Recently, I reviewed Jaywalkin’, the new CD by NoReduce. As I had a very positive reaction to the CD, I was excited to have a chance to see, hear, and review the opening show of their U.S. Mini-tour this past September, at Brooklyn’s Douglass Street Music Collective. 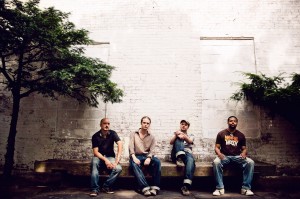 NoReduce is a great example of the continuing cross-fertilization between the New York, often seen as the center of the jazz world, and the vital and creative European scene which draws inspiration from across the pond. It consists of young Swiss musicians Christoph Irniger on sax, Dave Gisler on guitar, Raffaele Bossard on bass, and New York stalwart Nasheet Waits on drums. On their CD and at this show, No Reduce showed that distance in upbringing is no barrier to communicative and talented musicians who are in the same space and on the same wavelength. Tonight, they would play several pieces from the album, interspersed with lengthy and very engaging group improvisations.

The show began with Gisler playing clean guitar chords, followed in shortly thereafter by Waits with soft mallets. Soon, the guitar became distorted, and Irniger entered with a modern jazz-sounding saxophone line. The music began to feel like waves, but through the lens of hypnagogic sleep, with Waits’ now-intense drums providing a strong undercurrent. Finally, the bass joined in, and the music progressed, somehow subtly, almost into freak rock territory, and then the head of “Far Away…but close enough” emerged, followed by an orthogonal and yet interlocking guitar solo over a tight, angular rhythm; both soloist and rhythm section making jazz and rock references. This opening sequence was representative of the night, and the CD in many ways. No Reduce is a very patient unit, taking enough time in getting places so as not to gloss over or miss the various possibilities along the way, and will journey through musical spaces that on the surface are quite different, yet are fit together seamlessly by the band. They are excellent at getting to a destination at somewhat different, and yet complementary, individual speeds; and like their linear-over-time improvisatory progressions, are good having the individual musicians play in different styles which mesh into a single unified whole. 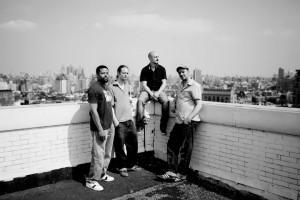 The second piece, “Endangered,” featured guitarist Gisler appear to plug his smart phone into his rig, making many species of strange ambient noises. The song eventually moved into a haunting and evocative New York City feel, not quite noir, but perhaps like walking through that kind of noir space while in another movie.

The third, and last piece, “The Mouse,” started with a slow, clean guitar, which soon moved into bluesy territory, with slide. The rhythm emerged into a slow rock feel, just enough off-center to stay very interesting. Irniger contributed a very out sax solo which still fit in completely with the song’s mood.

Individually, the players all impressed with their technique, and breadth thereof. Gisler’s playing ranged from spacey soundscapes, to clean and jazzy, to distorted space rock.  Bossard likewise went many places with his bass, from funky, to power chords, to jazzy (free and otherwise), to spacey arco bass. Irniger played simple, breathy lines one moment, lyrical arpeggios the next, and like Gisler, played solos that were at times orthogonal to what the rest of the band was doing, and yet interlocked perfectly. And Waits’ drums were propulsive, busy without the distraction of unnecessary notes, and very, very musical.

The real strength of this band, though, is the way that these talented and creative players come together as one. The band members are very attuned to each other, always responding to each other in interesting ways, and as an improvisatory band they are tighter sounding than many well-rehearsed units. This show demonstrated that they are as exciting and enjoyable in person as on the stereo, and it is to be hoped that they return to the States sooner rather than later.