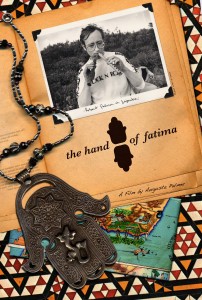 Augusta Palmer – a filmmaker, painter, scholar, a DooBeeDoo writer and a very good friend of mine – made it possible that her documentary film  The Hand of Fatima (2009, 75 min.) will be screened as part of this fall’s Meet the Maker series at the New York Public Library’s Library of the Performing Arts at Lincoln Center on October 25th at 6pm. She will screen and also discuss her documentary.

The Hand of Fatima  features the writing of music critic Robert Palmer, who is his father, terrific performances from The Master Musicians of Jajouka, a stunning voice-over by the fabulous Ned Sublette, and interviews with Donovan, Anthony DeCurtis, Genesis P. Orridge, Randy Weston and more. Here are few things people have said or written about the film:

“A combination of personal history and glorious music that is deeply compelling.” – New York Magazine

“Succeeds in shedding kaleidoscopic light on both the man and the music.” – The New Yorker

“A personal journey of reconciliation, of myth-making and myth-breaking.” – Robert Gordon, Author It Came from Memphis and director, Johnny Cash’s America

Read more about the available DVD and buy it:  here.

Please get the word out!