Yesterday I went to see Democracy Now! host Amy Goodman as she spoke at the Tribeca Barnes & Noble. In a talk entitled “The Elections, Superstorm Sandy, Climate Change, and the Movements That Make History,” Goodman linked Sandy and other extreme weather events to climate change, and discussed the corporate media’s failure to make the connection. She also talked about tomorrow’s elections, the movements that make history, and shared tales of her 100-city tour launched, which was supported by DooBeeDooBeeDoo, with the release of her latest book, The Silenced Majority: Stories of Uprisings, Occupations, Resistance, and Hope.

After her talk I had a chance to chat with her and gave her my CD SoSaLa “Nu World Trash”. I also offered her SoSaLa to be her house band, and she liked this idea. She also got my card, let’s see whether she’ get back to me. Enshallah!
My impression of Amy was that she looked far better in life than on TV. She looked relaxed and was very emotional and enthusiastic. She talked very well and controlled.
One important point she forgot to mention was, when she talked about popular movements around the world and in the US, the Green Movement in Iran which happened in summer of 2009 and preceded the Arabic Spring. (Unfortunately this revolutionary movement couldn’t bloom to its best because Michael Jackson’s death took away all the focus from the Green Movement news) This movement in Iran proved for the first time, how strong social networks, such as Facebook, Twitter, a.o., can have a strong impact on the process and outcome of the revolutionary movement. Yes, she mentioned the Occupy Wall Street as a domestic movement, but didn’t say whether this movement has any influence on today’s election. Honestly my hope was and still is that OWS would have a strong voice today. OWS is not dead but obviously not out today?!
Unfortunately I can’t vote today, but I hope that many people vote for candidates they really believe in including the third party candidates.
Text by Democracy Now! 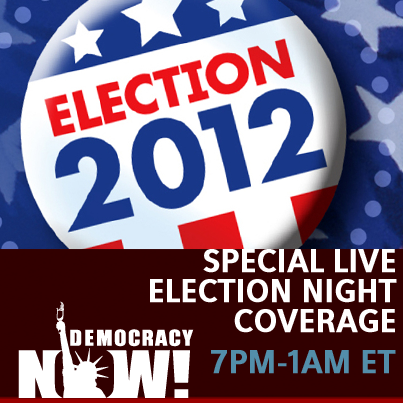 Tune in today, Tuesday, November 6, 7pm to 1am ET for Democracy Now!’s live special coverage of the 2012 election.

Amy Goodman and Juan González, along with investigative reporter Jeremy Scahill, offer real-time results from presidential and congressional races, and bring you coverage of voter suppression efforts and key issues in the race. Correspondents and guests will join us from Florida, Ohio, Colorado, Virginia, Massachusetts, Washington, D.C., New York City and more.

Join the discussion by using the hashtag #DNvote on Twitter to submit comments, photos and videos, sharing your voting day experiences and reflections on our Facebook page or sending email updates from your polling place and to  stories@democracynow.org with “election” in the subject line.