The New York Insight Meditation Center recently hosted a concert by sitar virtuoso Ikhlaq Hussain.  Hussain is a musician of the Dehli gaharana (whose lineage dates back to Hazrat Amir Khousro), who plays in Gaykali Ang, a style wherein the instrument takes on the expressive qualities of vocal music. He was taught by his father Ustad Imdad Khan, and by Pandit Ravi Shankar. He performed in US, Europe, Middle East, UK, Pakistan, & India. 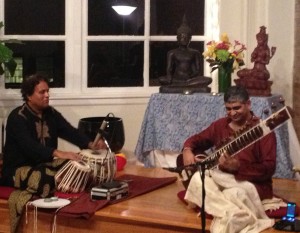 The venue, known for its meditation classes, yoga, and musical performance, was well attended. Hussain is well known among the classical Indian music audience of New York. After a delay (due to tuning problems brought on by the effect the cold, damp weather had on his instrument – an occupational hazard for sitar players), he began the alap of “raag Bagheshri”. The Dehli gharana was clearly recognizable in his approach. Carefully and with great sensitivity, he unfolded the raga.  Hussain has an approach to sitar wherein he surrenders to the mood of the raga, rather than actively pursuing it. He is also noticeably careful to preserve the integrity of the raga.  His personality as a humble, yet serious man is evident in his presentation of a raga.

His technical mastery of the notoriously difficult sitar is evident even to the casual listener.  His sense of rhythm his meends, speed, and accuracy were all flawless. Hussain’s occasional use of his third finger is evident of his gharana lineage. Other gharanas reject this technique. His tans were inventive and flowed freely. At one point, while playing a particularly difficult and aggressive passage, at the moment he landed on the Sum (one), his string broke!  The timing was synchronistic, and perfect. He repaired his instrument quickly, and began playing with more aggression and authority; with an astonishing display of virtuosity. At first, the audience had been noisy and distracted during the break. Hussain came out swinging, and commanded the audience’s attention and respect.

Then Naren Budhkar joined him on tabla, playing in teental (16 beat) cycle / rhythm. The gat was presented as a traditional invocation that all raga performers employ. Budhkar was particularly inventive.  In his solos, he played some wonderful things, with delightful teehais. Very powerful technique. The jhalla began and propelled the listener into ecstasy. Hussain and Budhkar played at breakneck speed; and invoked the energy of “raga Bagheshri” to a fevered pitch.

After an intermission, they concluded with a fine exploration of the classic “Rag Des”. All in all, a fine performance. This is the third time I attended Hussain’s performances; and he never fails to deliver anything but the best. 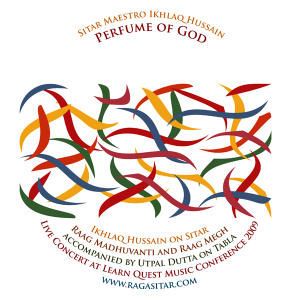 Ikhlaq Hussain’s recordings are highly recommended. His CD, Perfume of God was recorded live at the Learn Quest Music Conference, in 2009. It features a passionate interpretation of “raga Madhuvanti “(a romantic late afternoon/early evening raga that the Hindustani borrowed from the Carnatic tradition) and “raga Megh” (a serious and profound raga, played during the rainy season that is one of the oldest known ragas).

Hussain’s recordings may be found on his website (http://ragasitar.com), and at his performances. All of which are highly recommended.