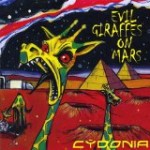 Cydonia, while rooted in jazz, draws sounds and influences from many other musical genres. At times, the sound is almost that of prog (“Where’s Dave,” “Black Tongue”) with odd and angular meters, metal guitar tones, and on the latter an overall sound that reminded me a little of Dream Theatre. Other songs took the feel of modern jazz (“Murky Water”), almost-Southern rock with a twin saxophone lead (“Morning on the Red Planet”), funk (“Merge”), and even a tango (the aptly named “Shango Tango”), while almost always retaining the band’s core sound. The band flows together tightly (but not so much so that it sounds rigid), has a wide and well-used dynamic range, can go from exuberant to ominous in the space of a song, and has a high energy throughout the album. The only thing I might have changed would have been to add a slower number; the frenetic pace does not slow down until the album’s eighth track (“Michael’s Ladder”); however, that is only a matter of taste. In general, the excellent playing by John Cave (guitar), Matt La Von (alto and soprano sax), Doron Lev (drums, percussion, hand claps, and giraffe noises), Jamaal Sawyer (tenor sax), and Ryan Slotnick (keyboards, and most of the songwriting) make for an enjoyable listen. This is a band which could do well both at progressive jazz clubs and prog rock festivals. 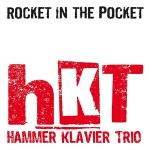 Rocket In The Pocket, as a trio project, has maybe a little less sonic range than the 5-piece Evil Giraffes (no saxes), but manages to make wide and good use of what they do have. The album opener, “Hysterioso” (a warped variation on the Monk classic “Mysterioso”), after manic opening piano arpeggios, goes into an angular piano solo over a funky, almost hip-hop beat. Several songs later (including “Suicide Train” which features what appears to be a distorted bass lead), in “Tekla” we hear a slow, lyrical watery bass lead to open the song, and then a switch into a more funky sound. The trio even throws some classical touches into the mix on “Play Me a Fugue,” with baroque piano lines mixed with episodes of a very swingy feel. Pianist Boris Netsvetaev displays an impressive range of playing, interspersing ethereal piano with active runs and even some contrapuntal sounds on the odd-metered “Take Fifteen” (which manages to groove over its odd time signature without being overly in-your-face about it). Philipp Steen shows a wide range of talent on this album, whether playing distorted leads, funky lines, and takes a lyrical arco solo on “The Incredible Atmosphere of Andrew Hill’s Music.” Kai Bussenius provides a solid bottom on drums and percussion, melding well with the other two musicians.

While definitely having different sounds on the surface, both Hammer Klavier Trio and Evil Giraffes on Mars are both creative bands, drawing from a wide variety of influences while staying rooted, however tenuously, in the wider world of jazz (or at least jazz-influenced improvisatory music). Both CDs are quite worth a listen, and probably more.