On December 11th, 2012 (the day before the arcane and mystically suggestive date of 12/12/12), the world lost a musical giant: Ravi Shankar. 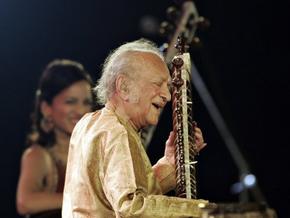 He was one of those unique people who single handedly changed musical history. Yet this was not confined within his culture and musical tradition: he changed it for the whole world.

Born on April 11th, 1920, he began his musical career as a multi instrumentalist in the legendary ensemble led by his brother, dancer/ choreographer Uday Shankar. At age 15, after having toured the world, he entered into a period of intense study under the tutelage of the legendary Ustad Allahudeen Khan.

During his young adulthood, Shankar made a name for himself as both a sitar virtuoso, and composer. Among his many accomplishments during this time, he composed and performed the music for the cinematic masterpiece Apu Trilogy, directed by the legendary Sanjiyat Ray. He was also musical director for All India Radio between 1949 and 1956.

He would develop a unique style on sitar that was very different from his contemporaries (even in his Maihar Garana); including having incorporated influences from Carnatic music of South India. His performances began with a solo alap. This was followed by a jor section with tabla accompaniment featuring compositions in khyal style. He would play the jallah end section at breakneck speeds which he approached within the dhrupad genre. His technique would often deviate from standard sitar technique; one example was his use of his third (ring) finger to fret the strings.

Tabla players are also in debt to Shankar. He would feature the tabla players, and give them solos; which, previous to this, was unheard of.

He also began his mission to introduce Indian classical music to the west. His concerts for American audiences included explanations of the subtleties of Indian raga. As early as the late 1950s, his name was spoken with reverence by western classical and jazz musicians and audiences. But it was his association with the Beatles, and friendship with George Harrison, that propelled him to “superstar” status. This propelled him into an unprecedented status: an Eastern classical musician revered in the world of Western popular music. His performances at the Monterrey International Pop Festival in 1967, and the Woodstock Festival in 1969 were legendary in the rock music world. This incongruity and cultural clash was difficult on Shankar; he would often ask audiences to refrain from smoking, drinking, etc., and was often frustrated with the lack of reverence they had for the music.

Shankar’s association and occasional studio work with the Beatles was, however, not his only contact with Western musicians. His collaborations with Yehudi Menuhin, Andre Previn, Zubin Mehta, and Philip Glass. He pioneered the use of the sitar with the Western orchestra with three Concertos for Sitar and Orchestra (the third was performed by his daughter Anoushka Shankar). His collaboration with longtime friend Harrison included the Concert for Bangladesh (which pioneered the practice of the benefit rock concert), and several recordings. In the 1990’s, Shankar was awarded India’s highest civilian honor, the Bharat Ratna, and received three Grammy Awards.

Shankar continued to perform and teach for the remainder of his life. His final concert was given at the Terrace Theater in Long Beach CA on November 4th, 2012, where he performed with his daughter Anoushka.

Shankar’s accomplishments throughout his career are astonishing. He single handedly introduced Indian classical music to the west, initiated several musical and performance innovations in classical raga, and helped redesign the physical structure of the sitar. He was successful in bridging the east and the west, and was arguably one of the most innovative musicians of the 20th century; earning the unconditional respect and love of the music world regardless of nationality, genre, or culture.

As of this writing, six months ago, shortly after Shankar’s 92nd birthday, I met and spoke to Anoushka Shankar. I told her that I owe her father a debt I could never repay. I seriously doubt there are many musicians, and audiences, who would not feel the same.

We may look upon what he has wrought, and celebrate! He earned his rest, and his place in history.