Reprinted from the February 2013 issue of Allegro, the magazine of the New York City musicians’ union (AFM Local 802). For more information, see www.Local802afm.org. The original article can be seen at this link: http://www.local802afm.org/2013/02/union-effort-continues-to-pay-off/

This January marked the second year of the contract between Local 802 and the NYC Winter Jazzfest. The festival, now in its ninth year, showcases a wide variety of jazz artists over two days in several Greenwich Village venues.

The union agreement was organized in 2011, when a committee of musicians who had played the festival, along with Local 802, brought the festival’s promoters to the table though an online petition drive. 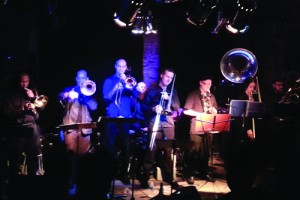 Above, Jacob Garchik and The Heavens, at the Winter Jazzfest. This is the second year that festival musicians were covered under a Local 802 union agreement. From left, Jason Jackson, Josh Roseman, Alan Ferber, Kenny Wollesen, Jacob Garchik, Curtis Hasselbring, Joe Daly, Reut Regev and Brian Drye. (Photo by courtesy of Allegro)

Since that initial petition drive, much of the work of organizing and maintaining the Winter Jazzfest agreement has been done online. The musicians’ committee, which is comprised of 10 to 12 prominent musicians who have played the festival, has done the majority of its decision-making via e-mail and conference calls. Even many of the negotiations with the festival’s promoters were conducted via e-mail and Skype. The contract, as well as the negotiating process, was not a typical one for Local 802. However, it may point to a new model for organizing efforts going forward.

This year’s Winter Jazzfest agreement includes an increase in scale wages, and guarantees further increases for the 2014 festival.

“The committee worked hard to make improvements in minimum scale wages,” said Local 802 Recording Vice President John O’Connor. “We came out with something we can be proud of while being mindful of the difficulties of putting on a festival like this. This demonstrates collective bargaining can work in all sorts of situations.”

In addition to the wage increases, the contract also extends the recording protections and various workplace standards established by its predecessor.

Reprinted from the February 2013 issue of Allegro, the magazine of the New York City musicians’ union (AFM Local 802). For more information, see www.Local802afm.org. The original article can be seen at this link: http://www.local802afm.org/2013/02/union-effort-continues-to-pay-off/