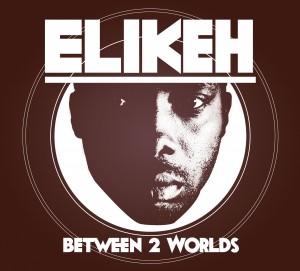 It is difficult to even say where the band Elikeh is from; band leader, vocalist, and rhythm guitarist Massama Dogo hails from Togo, in West Africa, and other members of the band come from a diverse array of places, including California, Nigeria, New York, Maryland, and Benin. It is not surprising, then, that their recently-released CD, Between 2 Worlds, shows influences from a wide variety of sources.

The CD was originally described to me as ‘Afrobeat,’ and while most of the songs on it have a definite Afrobeat-rooted rhythm in the bass and drums, the band brings in and melds ideas from many other traditions which makes for an original, creative, and varied sound on the album. One such mix of ideas is found in “Know Who You Are,” which has an intricate, grooving drum line laid down by Benin native Gabin Assouramou, while Dogo and Nigerian-born (and current Washington, D.C resident) guitarist Frank Martins weave dancing guitar lines reminiscent of JuJu music. As in many of the tracks, the horns are deployed very well, with tasteful horn lines that in this case would be right at home in both a ’70s Funk Show or a concurrent show at Fela’s Shrine. In “Olesafrica,” a Samba beat is strongly referenced within the Afrobeat core rhythm, and Assouramou takes a strong solo. A couple tracks, the fast, funky “Eh Wee,” (which features a ferocious sax solo) and the spare, almost folky “Nye Dji” even have elements which hint at alt rock.

Elikeh does a good job of mixing things up, too—for example, slow tracks come in several flavors, from the minimal percussion, guitar, and vocals of “Fly to the Sky,” to the funky, soulful, and even bluesy “Foot Soldier.” The lyrics lean toward the socially conscious, notably on the album-opening track “No Vision,” and “Foot Soldier;” frontman Dogo delivers the words in a strong, mellifluous baritone.

Notable guests on the CD include Vieux Farka Toure, who lends his vocals and guitar to “Alonye,” delivering a memorable performance with contrapuntal rhythm playing and a ferocious, nimble solo whose stinging tone reminded me of legendary bluesman Albert Collins; John Kadlecik (lead guitar and vocal) and Mamadou Cherif Soumano (kora) on the soulful track “Nye’n Mind Na Wo,” and organist Jeremy Calligan on “Know Who You Are.”

The album is tracked well and flows nicely, with faster, more energetic songs interspersed with slower songs, and a couple of 6/8 tunes breaking up the songs in 4. The arranging and performances are tastefully done, propulsive when necessary, and spare and gentle when needed.

In all, this is a well-done CD which is accessible enough to appeal to a wide variety of listeners, but edgy and original enough to be interesting, and funky enough to dance to. Be sure to check out Elikeh this Friday at Drom (NY) at 85 Avenue A between 5th and 6th Streets, at 9pm.