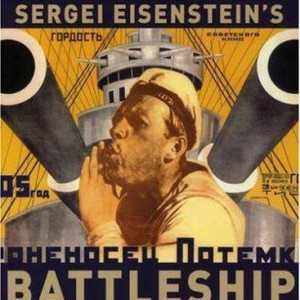 On Saturday, 16 February, THE DISSIDENT ARTS ORCHESTRA, provided an improvised score to a newly restored version of Sergei Eisenstein’s seminal film Battleship Potemkin at the 17 Frost Theatre of the Arts in Williamsburg Brooklyn. Led and conducted by THE RED MICRPHONE‘s vibraphonist/percussionist John Pietaro , the Orchestra included on this night Nora McCarthy on vocals, Cheryl Pyle on flute, Quincy Saul on clarinet, Rocco John Iacovone on soprano and alto saxes, Patrick Brennan on alto, Ras Moshe on soprano, tenor and flute; SoSaLa‘s Sohrab Saadat Ladjevardi (making his debut with the DAO) on tenor sax and vocals, Alon Nechustan on accordion, Javier Hernandez-Miyares on electric guitar, Laurie Towers on electric bass, Nicolas Let-man-Burtinovic on double bass, and Hollis Headrick on drums and percussion. 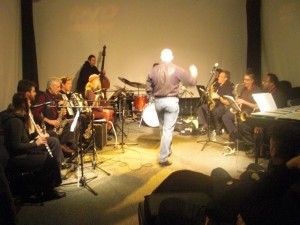 With such a large ensemble, even one who for the most part has played together consistently before, it’s always important to make sure that everyone’s on the same page, and conductor Pietaro performed this duty quite well. There were several cues that he could give, for example having the band play around a certain tonal center, or time signature; another cue had the band play the “Internationale” (generally when the red flag was raised); alternately, Pietaro could bring instruments in and out of the mix with a good deal of freedom for them to choose just what to play at the moment. The Orchestra rewarded this confidence by playing very well together over the course of the evening as a cohesive and synergetic unit.

The evening started with a pre-movie Overture, during which the band went through a shortened version of the overall shape of their music for the movie, albeit with different musical details, with Pietaro facilitating well from his conductors spot (when he wasn’t adding vibraphones or percussion to the soundscape). Iacovone’s soprano sax began the music, and the rest of the band added layers of overlapping long notes over pulsating waves of drums (quite appropriate for a battleship movie). On a micro level, there was actually a fair amount of movement for such a section, but the overall effect was that of long notes, and that’s a pretty neat trick. Soon thereafter, we heard vocalist McCarthy take the lead for the first time with a series of rich wordless tones over an urgent rhythm in 7. McCarthy demonstrated a very impressive tonal range, and soon the band came in with cacophonous interplay, starting with alternating pairs of instruments (e.g. alto-soprano, tenor-tenor) conversing, and then the pairs becoming threes and fours, until the whole band was involved. Then, out of this chaos a jazzy, swingy waltz emerged, at once out and yet locked into a hard swinging pocket. It was near this point that the advantage of having two basses became apparent, as one would lock down the bottom while the other played freely with the band. Finally, the band played some variations on the “Internationale.” 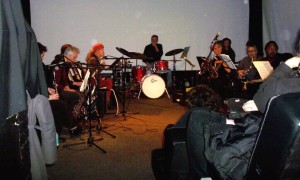 Then the movie started. A lot has been written about Battleship Potemkin, so as someone who hasn’t taken a film class since about 1990 (my big paper was on the Rocky Horror Picture Show), I won’t add to that. The film was shown on 3 screens, forming 3 sides of a square—the main one was for the audience, and the other two served to help the band members (arranged in a ‘U’ shape underneath the screen) see the action on the screen and tailor their playing accordingly. The band did an impressive job of enhancing the silent drama on the screen, providing an urgent, off-center beat and jazzy tonals when the crew of the ship begins to mutiny over maggot-infested beat. (It was at this point that I noticed the band pulling a neat musical trick of playing a 2-2-3 rhythm and then seamlessly morphing it into a 3-3-2.) When there was drama and potential execution on the deck, the band slid into a loose and swingy waltz, and went free and chaotic during the deck fight which ensued (side note: the head priest on the ship reminded me of the old man guarding the bridge of death in Monty Python and the Holy Grail). One of the musical highlights of the evening came during the funeral scene for the hero, who had died leading his shipmates in revolt against their cruel and clueless officers, as the band played a slow dirge, free and very together, with a hint of waltz underneath. Over this, McCarthy sang, and Saadat Ladjevardi chanted in Farsi. Conductor Pietaro did a nice job over the course of the soundtrack of bringing instruments in and out, providing good dynamic contrasts. As the film ended, with the red flag flying over the Potemkin and the other ships’ sailors joining in, the band played the “Internationale” one last time. 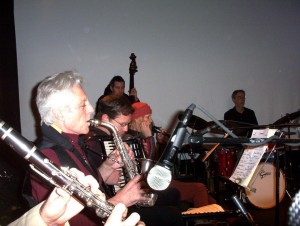 In all, this was a quite impressive multimedia presentation by THE DISSIDENT ARTS ORCHESTRA. The musicians played well together, making a cohesive work from improvisation, their ears, and their able conductor, and making the music enhance and otherwise go quite well with a truly classic film that has to rank as one of the most important in the entire film canon. The DAO plans more such mixings of old classics with new, improvised music this year; it is recommended that fans of film and improvised music make an effort to seek them out.