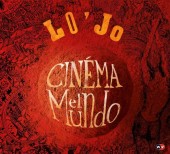 The CD begins with jungle sounds, and a poem (in French, which unfortunately, I don’t understand) by singer / keyboardist / band leader Denis Péan. This led into the second track; a soft, lilting ballad with memorable melodies, seductive backing vocals, and Péan singing / reciting his story.

The production is fascinating. The way the vocals were mixed is particularly creative. They often place the female vocalists in a distant background, without diminishing their presence or impact. Pean’s vocals are very prominent in the mix; standing at the forefront, like the singer himself leaning close and quietly speaking to you.

The most immediate impression is that of the French vibe. The whole CD invokes a variety of cultural influences; especially Arab and African. But the dominance of the French environment is inescapable. The Parisians (at least those progressive minded) have accepted the presence and influence of the “étrangère.” But the French, it seems, will always be French. They do not loot cultures like others do. They deconstruct and reconstruct them, and absorb it into themselves. This capacity to absorb inspiration without losing one’s own soul would, at least philosophically, put to rest the irrational fears of the French government and nationalists. As always, it is the artists and musicians who help correctly diagnose reality. But I digress.

The songs are quite imaginatively composed. Each one has its own character; yet they all blend well into a cohesive whole; rather like chapters in a book – or scenes in a movie. The musicianship among the band is flawless.

There are many interesting deviations from what one expects as the norm. The songs seamlessly combine several levels of musical textures, contrasting harmonies, and unexpected melodic inventions appearing from nowhere and just as suddenly disappearing before you are aware of having been shocked by them. The musicians almost never overtly display their individual virtuosity; this is true ensemble playing. One of the more interesting exceptions to this is the end of “El Cabo Blanco” where a heavily processed violin cavorts over a bed of cellos. “Zetwal” has a feel of a medieval carnival, the song driven subliminally by a calliope. In “Lila” the female vocals dominate, placing Paen in a more subordinate vocal role. “Comete Algebrique” is a beautiful instrumental featuring lightly dancing piano over which a string section weaves emotional tone poetry in an almost Glass-esque manner. The title track is a sparse and spacious beat supports an aggregate of vocal and violin counterpoints (with contribution by Robert Wyatt). The instruments float around with no specific direction, creating the dreamy uncentered feel of smoking opium in an expensive brothel.

There are more descriptions of these fascinating tracks I could give you. But I don’t want to spoil the surprise.

I really would have liked to have read an English translation of the lyrics. I get the feeling their story is one I would enjoy listening to. But perhaps this is not absolutely necessary. For us in the US who do not speak French, the linguistic ambiguity actually contributes to the mystique; and compels us to listen with our hearts.

Cinema el Mundo is one of those CDs that is best listened to at night; preferably in the company of friends and loved ones. The overall feel of Lo Jo’s music is that of being invited into the inner circle of a distant culture, and experiencing firsthand the lives of others, and delighting in the contrast between that which is unfamiliar, and that which you recognize as your own.

Event review: A Night at globalFest 2013