This article (part 2) was provided by Metal Postcards Rec‘s Sean Hockings. With Thanks To the author Julien Poulson of The Cambodian Space Project and Phnom Penh’s entertainment and listings website Leng Pleng 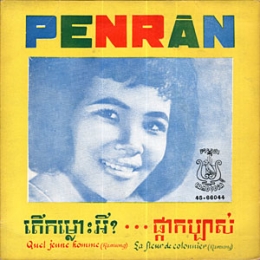 Meanwhile, over in Phnom Penh rappers, hip hoppers, dj’s and mc’s such as B-Boy Peanut, KK and the Tiny Toones crew, Prach Ly, Pou Klaing, Visal and the Klapyahanz crew, Jan Muller aka Professor Kinski and his sidekick MC Curly, led the way – many rappers from this loose community are ‘returnees’ Cambodian Americans who have learnt their skills in jails of the USA and, on deportation to Cambodia, have become success stories through their work to create youth programs where music and dance is positive and popular influence on Cambodian youth.

Cambodia’s music is still influenced by the splendor of it’s ancient forms, the beauty and grace of the Apsaras, the gentle, soothing sounds of the Khmer ensembles playing centuries old motifs on bamboo instruments but despite this rich musical heritage the soul of Cambodia’s music emanates from some of the darkest corners – it’s little wonder that one of Phnom Penh’s seedier establishments, a disco called The Heart of Darkness, takes its name from Joseph Conrad’s starkest exploration of the darkness inherent in all human hearts. The themes Conrad explores in Heart of Darkness of colonialism, racism, and savagery versus civilization are all themes that run through the Cambodian soundtrack – it’s a trip man. If you really want to get to a handle on the Cambodian music story, you can’t ignore the outrageously high number of Khmer divas who have, all too frequently, had their careers and indeed their lives end in abrupt and tragic circumstances. Jealousies and rivalries leading to acid attacks, murders, hired assassins, dance floors being suddenly be hit by random gunfire, dangerous liaisons, sex trafficking, violence and abuse, this is all part of netherworld that shapes Cambodia’s music story and, like the sentiment expressed in Srey Channthy’s highly original opening track on The Cambodian Space Project’s latest album, it’s Not Easy Rock & Roll and never has been.

After fire comes regrowth: old punks are turning up here in droves, fluttering in like moths attracted by the low lights, the cheap cost of living, the edginess of an almost anarchic social order and soon find themselves in bands, perhaps rekindling old rocknroll dreams or simply kicking out the jams in the dingy, dank hooker bars of Phnom Penh. At venues such as Sharkies, a place that claims to be South East Asia’s longest running rocknroll bar (but tellingly doesn’t encourage photos) boasts a swag of bands that are often fuelled by the same kind of irreverent punk attitude that drove The Dead Kennedys to come up with songs like Holiday in Cambodia. At Sharkies, you can also drink cocktails in mortar shells, survive three rounds and you win a t-shirt. Good wholesome fun! And don’t miss their upcoming show Didier Wampa from awesome French band The Wampas – it’s gonna be huge.

In every scene comes with its flipside, and this dichotomy in Cambodia’s scene is alive and kicking, there’s that same old chasm between “serious” and “popular” the debate over the value of lowbrow and highbrow art forms playing out but fuelling both debate and creativity. Cultural NGO’s like Cambodian Living Arts, have done wonders for the international profile of Cambodian music and arts, these NGO’s attract many musicians and arts workers who might tell you they’re ‘here to help’ (not everyone is), to join or initiate new cultural projects, to teach or learn from traditional art forms and while this side of town is somewhat elitist, its also a scene full of fascinating characters, not least CLA’s founder Arn Chorn Pond whose work in bringing together the surviving master musicians of Cambodia’s traditional arts has been invaluable in passing on traditional knowledge to the today’s generation. Arn was born into a family of performers and musicians who were involved in producing opera in Cambodia. After the Khmer Rouge came to power, Arn was sent to a children’s work camp. He escaped death by execution and starvation by playing the flute to entertain the camp’s guards. When Vietnamese troops invaded Cambodia in 1979, Arn fled his captors and many years later managed to start a new life in the USA. The success of his work in founding Cambodian Living Arts has led to the staging of CLA’s most ambitious international showcase Season of Cambodia and this is to be held in New York City April to May. Season of Cambodia intends to bring more than 125 artists from Cambodia to New York City for a major celebration of Cambodian arts, culture, and humanities. Musically, CLA will role out its usual suspect, Dengue Fever, Master Kong Nay and Arn Chorn Pond own group the Watterek Ensemble.

So here we have a scene where former Khmer Rouge soldiers can work alongside victims to stage operas and arts festivals. Runaways, punks, lost causes and other degenerates can form bands that mix and mash together an exciting culture clash, new works are bubbling out of this scene and regardless of who the players are or where they’ve come from they all part of a bigger picture, it’s an exotic and heady soundtrack that mixes up styles – from reggae to Khmer surin, ‘old timey’ bluegrass to Chapei Dong Veng, or to Isan or Molam, Parisian gipsy Swing to Punk Rock and Death Metal, the cross over happening, conceived or not, is the things that makes everything click together, it’s the new sounds of Cambodia happening right here and now.