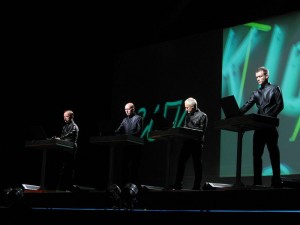 Kraftwerk performing in Kiev in 2008 (photo by Andriy V. Makukha)

An anon employee from Beijing record company let the cat out of the bag this week revealing to local press and AFP that the authorities in Beijing have banned the robotniks for agreeing to play a Tibetan benefit festival in Washington DC in 1998!  What’s even more incredible is that Kraftwerk didn’t even play because of very inclement weather.

Here’s a great piece by Pete DeMola for Beijing Cream on the subject.

John Lydon Is Controversial, Kraftwerk Is Not; So Why Ban The Latter? On China’s Whimsical Censorship Of Musical Acts

Ah, music festival season in China. With the balmy climes and fluffy white cottonwood pollen comes the annual rumor mill about which bold-faced recording artists are slated to perform at the summertime’s numerous annual kickoff events, which have been denied performance permits, and general conspiratorial grumblings about why this is and who’s to blame.

The controversy has already begun. Kraftwerk, an influential electronic music outfit, was denied permission to play at the Modern Sky Strawberry Music Festival in Beijing later this month, AFP reported last Friday. Meanwhile, another groundbreaking experimental act, PiL, the boundary-pushing brainchild of Sex Pistols co-founder and all-around gadfly John Lydon (formerly Johnny Rotten), was allowed to perform in Beijing and Shanghai this past weekend, despite Lydon characteristically crabbing to NME that he had to submit the entirety of his eyebrow-raising lyrical oeuvre to the Ministry of Culture… Read whole article here: http://beijingcream.com/2013/04/pil-kraftwerk-and-chinas-whimsical-censorship-of-musical-acts/