On a night promising to be the last of the cold weather, Roulette played host to a great master of music, and of life; Yusef Lateef. The very idea tends to inspire awe; a quarter of a century of making some of the most beautiful and sublime music the ear can hear. 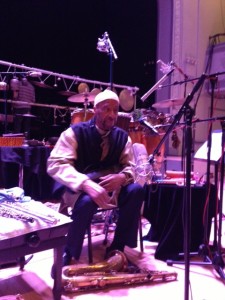 Yusef Lateef’s biography and resume read like a Renaissance man’s Renaissance man. Born in Chattanooga TN, he later moved to Detroit where he grew up with musicians like Milt Jackson, Paul Chambers, Elvin Jones, and Kenny Burrell. At the age of 18, he began touring with a number of swing bands led by Hartley Toots, Hot Lips Page, Roy Eldridge, Herbie Fields and Lucky Millender. In 1949, he toured with Dizzy Gillespie’s orchestra. It was around this time he converted to Islam. Over the years he’d also worked with Cannonball Adderly, Donald Byrd, Art Farmer, Curtis Fuller, Grant Green, and others. His association with John Coltrane made deep impressions on both men. He made his first recordings as a leader in 1957. Since then, he has recorded 54 recordings as a leader, toured the world, become a world class virtuoso on several instruments, composed many major works (including several symphonies), wrote several influential textbooks on music, authored two novels, two collections of short stories, and an autobiography. He is an emeritus Five Colleges professor at the University of Massachusetts in Amherst, MA, from which he was awarded a PhD in Education in 1975, and was named University of Massachusetts’ “Artist of the Year” in 2007. In 1985 he became a senior research Fellow at the Center for Nigerian Cultural Studies at Ahmadu Bello University in Zaria, Nigeria, where he did research into the Fulani flute. He has collaborated with other master musicians such as Barry Harris, Kenny Barron, Hugh Lawson, Albert Heath, Roy Brooks, Ernie Farrell, Cecil McBee, Bob Cunningham, Adam Rudolph, Charles Moore, Ralph Jones and Frederico Ramos.

Once of Lateef’s most intriguing accomplishments was the development of autophysiopsychic music. The possible definition of this word could require volumes to explain. In short, it is the act, and result, of a musician finding and developing the technique to express one’s unique musical voice.

The night’s performance began with the Momenta Quartet performing Lateef’s String Quartet no.2 2012. The first movement seemed to take up where Beethoven’s opus 131 left off (despite the deliberate endings between movements). There seemed no specific designation which was the 1st or 2nd violins; and the parts were very democratic in their equality of importance and role. The second movement hinted at the lyricism of the third; moving from a hint of Philip Glass to the kind of spontaneous flowing from one idea to another. Despite the almost aggressive individualism and iconoclasm, the music was notably devoid of egoistic self- indulgence. Only Yusef Lateef can write such music. 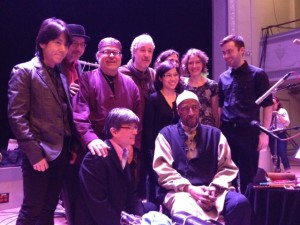 The quartet left the stage, and a trio consisting of J. D. Parran (soprano saxophone), Marty Ehrlich (alto saxophone), and Alan Won (baritone saxophone) took the stage to perform Lateef’s Trio in December 1998 op.2 no.2. The first movement explored a multifaceted composition that seemed like children climbing playfully among jagged rocks and irregular terrain. Melodies flew in and around each other and harmonies collided, occasionally making abrupt rendezvous in unison, before splitting off to wander away again. The first movement ended abruptly, and a more somber, serious movement followed. It was as if the children were facing some harsh reality and were entering the beginning of adulthood as a result. The third movement seemed to resolve the conflict of the second; facing the struggles of life and loss of innocence with stoic resolves and humor.

Pianist Taka Kigawa followed, and began Lateef’s Autophysiopsychic (variations for piano) 2012. A meditative entrance led the audience through a softly lyrical vision quest; a dreamscape wherein wondrous things are revealed, and the witness to these visions takes it in, not worrying about an understanding that will come later; or not at all. Nothing is startling or overwhelming; it is all a beauty in a language the soul forgot, and tries to remember.

After a brief intermission, Yusef Lateef and his long time collaborator, master percussionist Adam Rudolph took the stage. Lateef’s 92 years seemed to have had no effect on his absolute mastery of music. He began with using Chinese Baoding balls (iron hand exercise balls; some of which have bells inside them). He dropped one, sharing a chuckle with the audience. Rudolph responded with bells. Lateef plays an Asian sounding melody on a small flute. The effect of the two was like a koan. It was an invocation of nature, not a musical composition. As they moved through various instruments, the music took on the quality of speech: childlike innocence at first. Then, a sophisticated language arose. This evolved into a philosophical discourse. Rudolph’s flowing rhythms and Lateef’s deeply introspective and emotional saxophone painted pictures if all the complexity of life.

This faded into its conclusion, and became a primal sound painting, over which Lateef recited poetry. It was a sober reminder if the inevitable fading if youth, and that when life decays we have providence to call upon. Rudolph commented on piano under his words. This became a piano based lament over which Lateef offered a few notes on flute. The piano ended, and with the flute continuing, Rudolph took up the sintir. Lateef’s familiar approach to flute melodies gentle floated above a slowly evolving ostinato on sintir. The sintir was not played in the traditional manner at first, but became itself over time.

Lateef’s oboe took over, and cried out into a desert night.

This faded into oblivion, and the percussion fell like raindrops, eventually becoming a small torrent. When the storm subsided, Lateef’s welcomed the sunlight again on the flute. This became a blues / spiritual, sung over the deepest didgeridoo I ever heard. A blues on flute and daf followed, becoming an Asian meditation.

An encore was offered; Rudolph held down a strong beat while Lateef’s sax played its free expression. This faded into a poem that was actually a prayer.

Then, silence: followed by the kind of standing ovation due to one who has earned the respect of all who have the ears to hear. 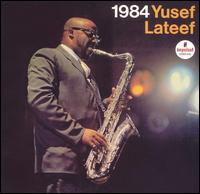 When I was in my teens, I saw the Yusef Lateef album 1984 in a record store. I thought it looked so cool; a man in a suit standing there playing a saxophone. I was not, at that time, mature enough to understand the music on that recording, but it was calling to me, drawing me in. In later, years, I made his acquaintance, and studied his work. It changed my life, and altered forever the way I play and hear music.

I can’t help but wonder what perceptions and wisdom are contained within the mind and heart of a man whose experience with music spans more than the length of my life. What must a man do to be able to express more poetry in a single note than most do in flurries of sound? How does a man whose destiny it is in this life to make music stand in the face of the infinity that is music, and dare to make a contribution? Yusef Lateef is an example of how this is successfully accomplished. We are truly fortunate to have the opportunity to partake of these gifts in our lifetime, given directly from the hands and heart of a master. It is… autophysiopsychic!