Review by Dawoud Kringle, photos and video by Veronique Lerebours 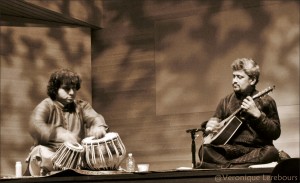 HarmoNYom, and  the Rubin Museum of Art presented a weekend long Pt. Ravi Shankar tribute series as part of the MUSIC ROOM FESTIVAL. On Saturday, April 6, I attended a performance of mandolin virtuoso Snehasish Mozumder, with Aditya Kalyanpur on tabla.

Snehasish Mozumder comes from a musical family. He got his earliest training from his grandfather, Sri Bibhuty Ranjan Mozumder, and later, his cousin Sri Tejendra Narayn Mahumdar. He later studied under Acharya Ajoy Sinha Roy (a former disciple of Ustad Allahudeen Khan), Pandit Anil Palit, and Pandit Ajoy Chakraborty. He has performed in many festivals in India, and toured the UK, Europe, and the US. He also received the Surmani and Jadubhatta Awards.

Aditya Kalyanpur has performed with many great raga, jazz, and fusion musicians, including Pandit Shivkumar Sharma, A R Rahman, Shankar Mahdevan, Pandit Jasrajji, Mickey Hart, John McLaughlin, George Brooks, Kenwood Denard, Natraj, and in a TV commercial with Ustad Zakir Hussain (when he was 11 years old). He has contributed to film scores, and has received several prestigious awards, including the Vidyasagar Award, and Sangeet Vishard Award. He studied at the Mumbai University and the Centre for Cultural Resources and Training in New Dehli.

I had the rare opportunity to sit on the stage to listen. While I have been on stages before (being as I am a musician), this was my first time watching a performance of Indian music this close to the musicians. This was truly enjoyable.

A shruti box had been droning since before my arrival. The musicians took the stage and made some last minute tuning. Mozumder spoke for a moment about having developed his raga technique on mandolin; and how Pandit Ravi Shankar encouraged and inspired him.

The sruti box was turned off (a prudent decision, as it would have distracted from the beauty of what he was playing), and the alap began. He slowly explored the notes if the raga. Taking his time, he began, as the classical raga form dictates, in the lower registers, and slowly moving to the higher notes. His use of meend on the mandolin was interesting; this is not something a western ear would associate with a mandolin His use of open strings to provide a constant drone on the SA was inventive, and always provided an interesting contrast to the melody. At times during the alap it seemed his interpretation of the raga lent itself to the physical nature of the instrument; which he exploited well. As he entered the jor, his playing became more adventurous, attacking the instrument with technical authority and passion. His mastery if the instrument is astonishing; and more to his credit, he is among a very rare breed of musicians who has taken an instrument outside its cultural context and made it his own. He ended with a jhalla in a blindingly fast japtal (5 beat cycle).  He ended with some shimmering chords (or rather, implications of chords – there is no chordal harmony in raga).

I was later to learn that there were no modifications on his instrument. This amazed me, because his meends were so flawless, and sounded like he was playing a fretless instrument. I asked him about it, and he said that he simply used oil to lubricate his left hand finger tips.

The two musicians paused to tune their instruments, then they began a composition in teental. Mozumder established the gat, and Kalyanpur explored the Tal. Then he began to venture forth into the raga.

Kalyanpur is an accomplished musician. He displayed brilliant technique, sensitivity, and easy communication with Mozumder. They had, in fact, never played together before, and had no rehearsals. This is, of course, the sign of truly great master musicians.

At one point, Mozumder played a taan that hinted at knowledge of jazz (or at least an appreciation of it). This was followed by an astonishing complex taan, which played a playful slice and dice with the teehai.

At one point, they adjusted their tuning. But, unlike most Indian musicians, they never lost or abandoned the rhythmic pace they’d established. Kalyanpur was largely responsible for keeping the momentum going. 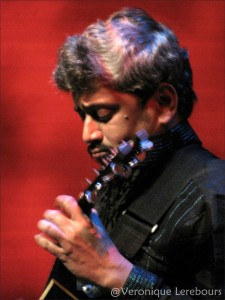 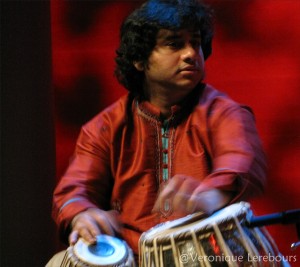 One thing that Mozumder was also very good at was in coaxing a wide variety of tones and colors from his instrument. He and Kalyanpur deftly explored the dynamic of the music. And they played fast; which, of course, is nothing unusual for Indian musicians. But it seemed the sound and the nature of the mandolin, like the tabla, demanded blinding speed as the most eloquent way to get the most from the instrument. The technical mastery of both musicians served to underscore and accentuate the transcendental quality if the music. There was no mere showboating here. The blinding speed was necessary to create an effect.

But Mozumder paid a price, he broke a string. Kalyanpur joked that this gave him the chance to do a solo. He played a solo that was simply amazing. It seemed that he distilled everything that could be done with tabla into that brief solo, effortlessly coaxing a variety of colors, tones, and rhythmic possibilities from it.

They finished with a ragmala in dadratal. The alap was like a sad love poem. At one point Mozumder played something that, to my ears, was reminiscent of Django Rhinehardt. Then the gat began. Again, the flavor of gypsy jazz permeated what they were playing. They clearly stepped outside the raga tradition with this piece, without leaving it completely. The adventurous evocation of a wide variety if cord, moods, and musical forms were one of the most radical ragmalas I ever heard. At one point they played something that – to my ears – had vague shades of the qualities of Coltrane and Hendrix. The piece ended with a series of daredevil jhallas separated by startling teehais (during which time he broke another string!). He placed a final melodic signature, and the music ended.

The entire concert was marvelous. And Mozumder is living proof of  the fact that music, in all its forms, is endless in its possibilities, and in its transcendental beauty.