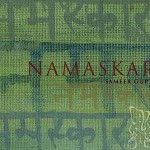 Bass and piano hang a low note in the air. A sarangi asserts itself as the voice of a sad worldly wisdom. That Ab (or A; I am too engrossed in this beautiful music to pause the CD and check with an instrument or tuner) in the bass, shimmering cymbals, and crystalline piano chords weaving around that ancient voice. The groove and structure of the tabla, bass, and piano make their entrance, and the sarangi establishes the melody and explores its possibilities. Thus does “Aaye Ne Balam,” the first track on Sameer Gupta’s Namaskar CD begins.

The music is a unique approach to Indian / jazz fusion. Many of the compositions were taken from Bollywood, old folk songs, and traditional ragas. There were other intriguing sources, which I will mention later. But the approach Gupta and crew take to the music does not in any way produce the kind of results one would expect. This recording has produced music greater than the sum of its parts, and ventures into a direction that has seemingly never been explored before. Cary’s keyboard, Royce’s saxophone, and Gupta’s kit drumming injects a jazz flavor and sensibility into everything it appears on. And the electronics that appear bring it further from the older styles. Yet, India is always present.

Some of the highlights include “Love’s Lying Story,” a sad ballad with an almost angry subtext. “Jangle” is a jazzy environment wherein Reddy’s sitar and piano spreads their wings against the Gupta’s tabla played at breakneck speed. “Puriya Harlem Dhanashree” transforms the classical raga puriya dhanashree into an excursion into the jazz underground. “Attachment” I can best describe as pretty. Watery and idyllic. “Thumri” is the most traditional piece on the CD, with the sarangi playing most of the melodic parts; although the Rhodes piano sprinkles its seasoning on the music. “Raga Misra Shivaranjani In Mishra Tala” takes the sarangi into an unfamiliar territory, with the kit drums playing the tabla’s parts. “Blue in Green (Raang)” is an exploration of the old Miles Davis classic, leading the Rhodes, drums, and bass through tabla land. I’d have liked to have heard what the sitar and sarangi do with this though.

Namaskar is a brilliant offering. If this is where the meeting of different cultures is heading, neither we, our children, nor their children have anything to worry about. We have a bright future.

Concert review: Snehasish Mozumder proves that Indian classical music can be played on a mandolin