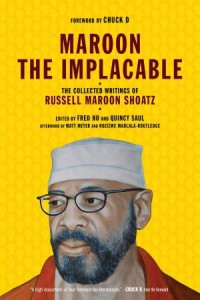 “There is a war going on in America.” Thus began the book release event for Maroon the Implacable: The Collected Writings of Russell Maroon Shoatz.

Russell Maroon Shoatz is a political prisoner who was unjustly accused and convicted of a violent crime in association with black militants against the Fairmount Park Police Station in Philadelphia that left a police sergeant dead. He was kept in solitary confinement for approximately 30 years. The Pennsylvania Department of Correction unlawfully altered the consequences of Shoatz’ conviction; essentially sentencing him to die in solitary confinement.

The event was produced and hosted by Scientific Soul Sessions. SSS is a collective dedicated to the prefigurement of a new society free of imperialism, colonization, racism, heteropatriarchy, and capitalist exploitation. They oppose all forms of social inequality, and stand for the dignity and self determination of oppressed people. Their political ideologies are, to quote their literature, “based on excellence and experimentation.”

The ceremonies began with a reading by Matt Meyer of War Resistor’s International from the Maroon’s writing set the mood for the event. He was joined by Iyanna Jones of Black Waxx.

Rebel Diaz, a hip hop duo, was the first musical performer. They led the crowd in the kind of techniques usually used to elicit an audience response. Their politically, socially conscious lyrics were delivered in classic hip hop fashion.  They conveyed their message in a clear and unambiguous manner, and performed a well executed show. They were well acquainted with political struggle; their father was a political prisoner in Chile under Pinochet.

After this, while hats were passed around to collect donations for the movement, Meyer introduced Judith Malina, founding member of the Living Theater. She spoke about non-violent revolutionary action against the prison industrial complex.

Hip hop artist Majesty was next. His style was more personal, more autobiographical, and placed this perspective on the setting of social corruption, and his experiences in it. His other poetry mixed politics, historical revisionism (in the sense that the “official” interpretation of history is a lie that serves the agenda of the ruling class) with a sense of the necessity of a foundation of morality and compassion.

Gary Bartz went on next. The legendary saxophonist spoke about his early years with Miles Davis, Max Roach, etc. and the likes of Malcolm X; mentioning that the FBI was watching him all the while. Then he played “It’s Time”. His solo rendition was absolutely beautiful; lyrical and emotionally eloquent. Then he offered an improvisation; a blues in Bb that was both passionate and playful. He finished with an original piece, “The Song of Loving Kindness.” Bartz proved once again his mastery and beautiful spirit.

After some speech by Meyer and Jones, Soffiyah Elijah, NY Corrections Associate Director, and former law professor at Harvard Law, spoke, giving an overview of Maroon’s legal situation. She offered a review of the legal and political basis for the call for Maroon’s immediate release; and emphasized the inhumane treatment Maroon suffers.

Maroon’s daughter, Theresa Shoatz, was next. She spoke about her personal experiences as the daughter of a non-violent political activist who was imprisoned for no reason other than that he spoke his mind.

Saxophonist, composer, writer, activist and co editor of this book Fred Ho was asked to speak. Along with speaking about the need to continue the struggle, he reiterates the need for financial support for Scientific Soul Sessions: and donated $1000 cash.

The final performance was from Jamal Joseph and the Impact Repertory Performance Company. Impact is an R&B soul / gospel / hip hop vocal group consisting of a lead singer and ten teen singers/ dancers / poets. Their performance was very professionally conceived and executed. They all exuded a feel of enthusiasm and sincerity that was infectious.

The whole of the presentation inspired an enthusiasm to participate in activism. It is essential that the injustices inflicted upon Maroon and others like him, regardless of what nationality or political affiliation, be addressed and stopped. Let it be hoped that their efforts bear good results.