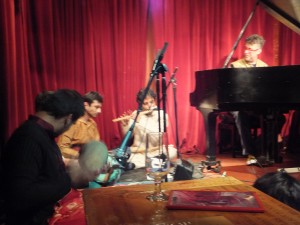 They began with a composition in a 5 beat cycle. The percussionists did a duet within the rhythm; at times bringing triplet phrases into the 5. The percussion and bansurai / mandolin traded back & forth. They would explore all the permutations of the phrases and melodies. Bansurai & mandolin would play variations on the main melody so that it would expand and contract. They came together and wove the piece into several intricate teehais.

The next piece was a pentatonic raga. The piano started with chordal melodies. The bansurai came in with a melody that stayed within the raga; but it worked very well within the chords. Then they stopped and vocals and Jews harp played; after which the piano and bansurai returned. It was a beautiful piece, but the back and forth between piano and Jews harp was very slightly disconcerting; almost avant-garde. That said, it had an idyllic delicacy that was wonderful.

The next piece was based on a Carnatic scale. The piano started it, weaving shimmering arpeggios and hurling lighting bolts into its own maelstrom. This gave way the drums beating out a powerful rhythm and the mandolin leading an intricate melody. The Indian instruments were mirrored by the piano; which created an interesting effect when the meends (bend and glissandos) were played against the piano; which cannot do this. The song increased in its intensity, propelling the audience into ecstasy. Each instrument took solos that were absolutely breathtaking.

After an intermission, the band returned. The song they began seemed to start out of nowhere, with a dreamy floating sense. Melodies from the bansurai and piano began to take form. Then the mandolin took the bansurai’s place, sliding its liquid melodies over the shimmering piano arpeggios. Then, an angular melody paved the way to the percussion. The bansurai responded.  This grew to a climax and relaxed into separations of parts; which would again coalesce into intricate unison at times the mandolin would introduce minor thirds into the major tonality. The effect was very noticeable. He would use this contrast with the bansurai, yet the major would always reassert itself.

They finished with a composition called “Sa” in an 8 beat cycle.The piano and percussion started this out, and the mandolin and mandolin followed. The melody was another intricate composition. The piano’s part had a very American blues feel which contrasted with the Indian instruments; even though they were essentially playing the same parts. The solos everyone took were breathtaking. The audience was swept off their feet and carried off onto a flight of musical beauty.

The whole performance was much like a chamber performance. The Carnatic element was seeking its place in an environment that was created for another type if music. Yet the beauty and virtuosity was always there. The percussionists with Askara were brilliant. Of course, one expects this from Indian musicians. The thing that was obvious was how much music the got from such a simple set up. Akshara has proven themselves to be master musicians, whose work is exemplary of beauty and sublimity.

Regrettably, Cornelia Street Cafe not well suited for Indian music.The placement of the stage prevents intimate contact between musicians and audience. The waiter’s movements and talk occasionally made it difficult to concentrate on the music. This is especially bad when musicians of high performance standards are trying to create their art. To exacerbate the situation, there were a few people in the audience who wouldn’t shut up either; talking among themselves and giving the musicians no respect. It is something that needs to be addressed by all. And what’s obvious is that a mutually advantageous solution is easier to implement than one may think.

Concert review: Snehasish Mozumder proves that Indian classical music can be played on a mandolin