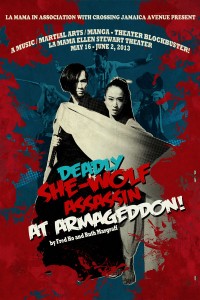 Fred Ho and Ruth Margraff’s “Deadly She-Wolf Assassin at Armageddon!,” at La MaMa’s Ellen Stewart Theater, was an astonishing production. As the audience assembled, fog hung in the air before the performance. Over the stage, red rope intersected like a massive, yet minimalist spider web. After a brief introduction, mournful Asian music preceded the lights going down. The darkness lifted to reveal the actors who’d been hiding in the darkness. Anka Lupes’ set design was very simple, yet always augmented and drew the audience’s attention to the actors. Chad McArver’s lighting severed the story beautifully. A long stripe of fluorescent red filled with Japanese calligraphy crosses the floor; suggestive of a sword blade, or perhaps a barrier of some kind. The costumes were all reds and blacks, with lots of leather. The blood-red colors that saturated everything spoke eloquently of the violence of the story.

Thus began the play, directed by Sonoko Kawahara. The story is of the type found in classic samurai and kung fu films, but is mainly based on the classic manga series “Lone Wolf  and Cub (Kozure Ogami),” created by writer Kazuo Koike and artist Goseki Kojima. The story begins with the Rogue Assassin; an itinerant former executioner and his young son (alternately played by Jet Yung or Bradley Fong). A Shogun (Rick Ebihara) is furious that his underling, Iyagu (Perry Yung), has failed to kill the Rogue Assassin (Yoshi Amao), who abandoned the Shogun’s service long ago. The Shogun hires three assasins to eliminate the ronin. But Iyagu has his own plans to use the Deadly She-Wolf Assassin (Ai Ikeda), who, at the same time, has ties to the Rogue Assassin and his son.

It was clear that Iyagu was manipulating the She-Wolf. But She-Wolf had her own principles. Iyagu realized the shogun was helpless in the end, and even though he was aware of his own helplessness, he used She Wolf to achieve his own ends. Thus is always is with political intrigue.

Throughout, there was a ball, a child’s toy that the Rouge Assassin’s son played with. At one point, the child was told he must chose between the ball and the sword. The symbolism of the ball was that of lost innocence, and the necessity of being a warrior to survive and live with honor in this world. The ball was the price we all must pay. 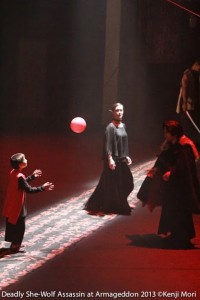 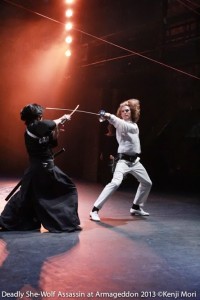 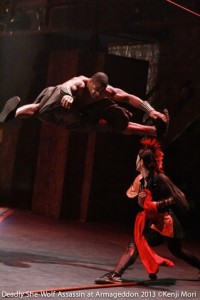 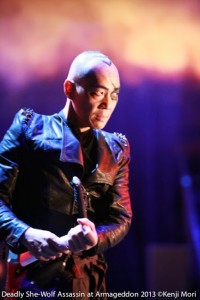 All the dialogue was performed by Marina Celander. The actors express only the occasional battle cry preceding or howl of death agony. She spoke everyone’s parts, deftly changing her voice for each character.

The choreography was astonishing. Everything was graceful, and striking. The individual talents of each character was obvious in their martial artistry: at times, slow motion was pantomimed. The Rouge Assassin’s fighting was efficient and relentless. Bok Mei Lotus (Teake) was a Chinese Shaolin monk who had fallen from grace was at once lethal and tragic. Colonel USA (Luca Nicora) was an American personification of white imperialism used an overconfident mix of western gun play and French fencing. Qaseem the Killing Machine (Jerry Ford) was an African slave trader whose fighting style was ferocious and relied heavily on physical strength, somewhat reminiscent of Bain in “The Dark Knight Rises.” Ai Ikeda the She-Wolf’s indefatigable energy, blinding speed, and lethal precision was absolutely amazing. Even at rest, she seemed a split second away from springing into action.

Lastly, but not least, the music, composed by Fred Ho, was powerful and brilliant. Expertly conducted by Masaru Koga (who also played alto sax, shakuhachi, and fue), the music embodied both traditional Japanese music with protean jazz stylings.  Much of the Japanese influence was realized by koto master Yumi Kurosawa.  The ensemble also included Ben Barson (baritone sax), Wayne Batchelor (electric bass), Art Hirahara (keyboard), and roayl hartigan (drums / percussion). Every note was always effective in creating the mood needed at any moment. Yet it was clear the music stood on its own merit.

Deadly She-Wolf Assassin at Armageddon is a masterpiece.