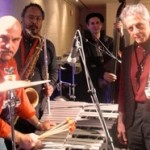 The Red Microphone consists of John Pietaro on vibes, percussion, and spoken word; Ras Moshe on tenor and soprano saxophones, flute, and spoken word; Rocco John Iacovone on alto and soprano saxes; and Nicolas Letman-Burtinovic on double bass; with a guest appearance by Nora McCarthy, who adds vocals to “L’Internationale Reconstruct,” a re-imagining of “The Internationale” by Pierre Degeyter, Eugene Pottier, and Hanns Eisler (adapted by Pietaro). All are members of the Dissident Arts Orchestra, known for adding improvised live soundtracks to classic movies.

The Red Microphone Speaks! contains music from several sources; some of the pieces are free improvisations, others are songs from the rich Leftist tradition adapted by the band, and saxophonist Iacovone contributes an original piece (“Freedom Theme”) which opens the album. The band makes use of spoken word samples on numerous tracks: on “The Proof Is Overwhelming,” they weave a tight free improvisation under John Howard Lawson‘s protest statement to the ironically named House Un-American Activities Committee in 1947. The improv is a good example of the way the band can patiently develop a piece; it starts out with a rich, overtony arco bass soon joined by flute, chimes, and percussion for the net effect of a slow, eerie, windy wet day to a busy (but not distracting) three way conversation between the saxophones and the vibes, over an ominous arco bassline. Overall, the music in this piece supports the spoken words very well, with the saxes punctuating and responding to Lawson‘s strong words, and the overall stormy vibe of the improvisation matching the feel of a time when freedom was under threat by powerful inquisitorial committees. The previously mentioned “L’Internationale Reconstruct” is another example of the use of found voices, with snippets of Malcolm X, Angela Davis, Dalton Trumbo, and V.I. Lenin interspersed with pulsating drums, and gentle saxes and vibes yielding over time to a more frantic and outside collective sound before returning to the main “Internationale” theme.

In addition to sampling, The Red Microphone will also, on occasion, provide their own voices to a text. This is most notable on “God To the Hungry Child,” an adaptation of a Langston Hughes poem with music by Janet Barnes and John Pietaro. After an angular, swingy group improvisation, Ras Moshe recites lines from the poem, while Iacavone’s sax provides instrumental response to Moshe’s strong voice, and the vibes and bass give texture underneath.

As a whole, like at their show, The Red Microphone does a fine job of playing as a tight unit, able to move as one or complement each other while playing quite different parts; and finding a nice balance in letting each player make an idiosyncratic individual contribution to a very cohesive whole. The band also builds each piece well, with a good mix of patience and daring. Album opener “Freedom Theme” provides a nice example of these qualities, the song starts with arco bass long notes, soon joined by dreamy vibraphones and then saxes. Soon, though, the music becomes more urgent and free, and then morphs into a funky bass rhythm over which the vibes and harmonizing saxes play a ’60s -ish jazzy theme. “Freedom Theme” provides a notable example of a very interesting use of space and musical dialogue that appears on several tracks; the saxophones start to converse and counterpoint each other, and the vibes join in, playing a counterpoint to the ongoing shape that the already-in-counterpoint saxophones are making. Perhaps this can be thought of in terms of a cladogram, with the saxes as two species in one genus, and the vibes as the next genus over. At any rate, it is quite enjoyable to listen to and the players manage to pull this off even when playing somewhat orthogonally to each other. Another example of this can be found on the “Song of the United Front” (by Hanns Eisler, and adapted by The Red Microphone) in the middle section (between two head sections that combine a swing and march feel). Even when all the players are playing busily, they manage to avoid stepping on each other’s toes, a notable example of this can be found in the mid-section of “L’Internationale Redux.” However, the band is also able to make excellent use of wide spaces, as demonstrated in the beginning of album-closer “The Times.”

Individually, the players each make interesting contributions to the whole. Vibraphonist Pietaro is equally at home providing dreamy textures, rapid lead lines, or complementary counterpoint to the rest of the band. As an accompanist, he does an excellent job of filling the space that would often be filled by the left hand of a pianist, not unlike the rhythm guitar of Bob Weir of the Grateful Dead. Bassist Letman-Burtinovic gives the band a rock-solid bottom, and uses well a wide array of techniques, from arco overtone-rich long tones (“Freedom Theme,” “The Proof is Overwhelming”) to rapid-fire plucked notes (“One for Robeson”) to make a rich low-end palette. As noted above, saxophonists Moshe and Iacovone converse extremely well together, showing great listening skills and creativity, and are both able to take the lead individually as well. “L’Internationale Redux” provides a good example of the latter, with Moshe‘s jazzy tenor sax solo followed by Iacovone‘s optimistic soprano sax; while in addition to examples from earlier, the mid-section of “The Times” sees the former, with Iacovone and Moshe making intricate shapes together and staying together while playing freely and sometimes orthogonally to each other.

In all, The Red Microphone Speaks! is a fine collective effort created and constructed by a group of talented individual musicians; energetic, cohesive, and with a revolutionary bent that is strong and yet organic (and not at all overwhelming). It is an example of free music at its finest; of what happens when several musicians make a commitment to spontaneously create as one, while not losing their individuality.