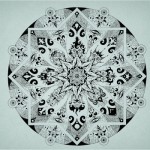 This latest offering by the innovative oud player Brandon Terzic takes the oud into territories that approaches the supposed dichotomy between east and west not as “either/or” but as “both/neither.” With tabla/percussion virtuoso Ravi Padmanabha as the sole accompaniment on this recording, Terzic seeks to go beyond the concept of east and west. This is not the result, but the starting point for their music.

Brandon Terzic is a New York City based multi-instrumentalist (oud, ngoni, and guitar), teacher, composer, and band leader of Xalam Project. He has traveled, studied, and performed through out the world.

Ravi Padmanabha has studied tabla under Pt. Sharda Sahai and Pt. Samar Saha. He founded “Bul-Bul Tarang Gang” and “My Nada Brahma” and performs with his two brothers in Family FUNKtion & the Sitar Jams”, and in duo with Steve Baczkowski. Ravi also plays drum set, bul-bul tarang, and other instruments.

The CD’s first track, “Anubis (The Jackel)” starts with Padmanabha’s atmospheric invocation, soon answered by pensive notes on Terzic’s oud. After building strength with the harmonics encoded in the notes and sounds, the piece takes flight, hunting and prowling the sonic landscape.

During the title track, the listener (even one untrained in, but sensitive to, traditional music) begins to realize what Terzic & Padmanabha are attempting to achieve in this project. The percussion movements glide and float in ways that owes nothing to the strict adherence to traditional Indian taal rhythmic structures. Often times, the sounds they produce stand majestically like temples or timeless monoliths. Terzic’s approach to the oud is iconoclastic. His training in maqam is just as obvious as his training in jazz; and he makes no distinction between them. In the solo piece “Hamza El Hendrix” he whips the prepared strings into shrieks of ecstasy, like John Cage without the restraint or pretension. The communication between the two musicians is precise; almost telepathic.