The event on June 3rd at the National Black Theater in Harlem, hosted by Scientific Soul Sessions, contained more than met the ear or eye. It was buttressed with next-level music; a soulful solo performance by the Iranian music activist Sohrab Saadat Ladjevardi in the lobby prepared us for holding nothing back. We then flowed into the otherworldly wonder of the Scientific Soul Band, led by Ben Barson, premiering an original composition titled “Insurrealista.” The ensuing debate between veteran revolutionaries Fred Ho and Eric Mann  (the Strategy Center) could only have been a beginning. But for those of us reading between the lines (and quite a few of the people in the audience certainly were) we can detect in this beginning what is and will be the debate of the century. It is not a debate about the problems but about the solutions.

We know that capitalism today is genocidal and ecocidal, and that in these times of climate apocalypse, economic collapse and global warfare, more than ever we can agree with George Jackson that reformism can be summed up in one word: “fascism”. In other words we agree that revolution is necessary for both people and the planet. Moreover we agree that the revolution must be ecosocialist – transcending both capitalism and the industrial productivist socialism of the 20th century. We also agree that oppressed nationalities must be the leaders of this revolution. Finally, we agree that we need to combine science and soul to get us there. But how do we begin? How do we organize? That is the debate of the century. Here are the two positions, impossible to completely summarize but nonetheless clearly drawn, taken up by Eric Mann and Fred Ho respectively:

1. We need mass campaigns grounded in the daily-life struggles of working class oppressed nationality populations. People learn and become radicalized through mass reform struggles – out of them will emerge revolutionary consciousness and struggle. We need to build more of these mass campaigns for radical reforms, and do so as revolutionaries, educating about empire, and consolidating victories, concessions and consciousness toward a revolutionary future.

2. We need to reject the entire framework of mass society. The practicalities of struggle within this system are toxic, and will literally give us cancer. The accumulation of reforms do not create revolutionary conditions but take us further away from them. The reform struggle deepens colonization to the matrix of modernity. We need to begin an exodus of revolutionary maroonage, where people pull out of the system altogether through the prefigurative production of a future decolonized society. 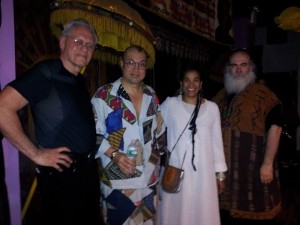 The debate will not be settled except in practice, and as it is tested and developed in the minds of those who engage with it. The first, more or less, is that promoted by Eric Mann and the Los Angeles-based Labor Community Strategy Center. The latter is promoted by Fred Ho and the New York City-based Scientific Soul Sessions. Stay tuned to both!

But the real question which will settle the others is: how much time do we have? If we have 100 years to make a revolution, then there is still time to develop more revolutionary consciousness and leadership through reform struggles in mass campaigns. But if we have only 10 years, do we have time for that? What if we have only 3 years? According to some climate scientists and ecologists, our time-line for planetary survival may be that short, or even shorter.

Both positions denounce each other for not being real – either for not meeting people where they’re at on one side, and on the other, for not dealing with the real toxicity of the system, for accepting that we must work within it on some level. But what is real? Reality is four dimensional phase space; the relativistic space-time continuum. The flow of time distinguishes it as much as its spatial dimensions. So how much time do we have, and what then do we make of reality? The revolution of our dreams in 100 years, or the revolution of waking life, today, in your lifetime? The only difference between one reality and another is our collective belief and the determination to produce and reproduce it materially. Reality is what we make of it. Like revolution.

Should we keep it real? Or are we insurrealistas? The musicians know to ask: what time signature will be the pulse for our reality and our revolution? Will we be ready when the beat drops? Can we take it to the bridge? Can we play over the changes? And when the break comes, will we be ready to solo?