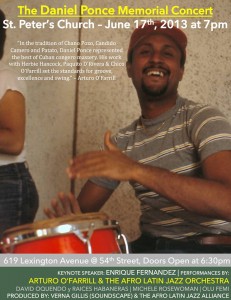 Daniel Ponce the brilliant Cuban conguero/rumbero died in March of this year. If you heard him you remember him. Musicians are gathering as a musical tribute .

Featuring the fearless-est extemporarios to walk the streets of New Amsterdam:

Eclectic percussion master Adam Rudolph seems to turn up at the Shapeshifter every couple of … Tonight he duets with funky jazz-rock guitarist Jean-Paul Bourelly.

“Frontman clarinetist Ismail Lumanovski is an extraordinary player in his own right, leading the group through a blistering series of haunting dance numbers and a couple of one or two-chord jams that the players used to show off their sizzling chops.” – Alan Young, Lucid Culture Blog

5. ASM Walks the Dog: The Music of John Wriggle

In this one time only retrospective of John Wriggle‘s uncanny shadow-jazz, Anti-Social Music  (ASM) assembles a 25-piece orchestra to recontextualize a collection of striking miniatures drawing from 1999-2004, short vignettes written as features for improvisers and ensembles from New York’s eclectic new music and jazz landscape.

#1 Kid is a lovely group of gents who play the chamber- bounce, bathroom dance music of Adam Dotson. An offshoot of the indie pop/ afro-beat group Rubblebucket, #1 Kid is in its first year of life and has recently released their debut recording; an EP called Boytones produced by #1 Kid/Rubblebucket guitarist Ian Hersey. It has been called “provocative” and “cute” and “fun”. Also “sick”. “Great music to dance to or go to the bathroom to!”

Touching tackles skewed pop a la Deerhoof and Jelly-era Flaming Lips; crunchy riffs the likes of which Queens of the Stone Age recklessly exploit; and fantastical diversions as exemplified by 70s prog-rock titans Genesis. Technical acumen and screaming enthusiasm funneled into a direct and engaging sound.

““David Hykes’ music is haunting and transporting. It takes you some place completely otherworldly – to the Ancient Time. From the moment I heard it, there was no doubt….His fantastic new album Harmonic Mantra really takes me out there.” – Renowned buddhist filmmaker Khyentse Norbu.

*Film music: “Travellers and Magicians” by Khyentse Norbu, “Meetings with Remarkable Men” by Peter Brook,
“The Tree of Life” by Terrence Malick

Underground Horns is a Brooklyn-based brass band playing Afro Funk, Bhangra & New Orleans grooves and beyond. AllAboutJazz called their 2009 debut record Funk Monk“kick-ass dance music…that brushes up against psychedelia…with shots of funky brass juice.” In 2010 they recorded their second album Big Beat which The New York Jazz Record’s Ken Waxman called “an unapologetic party band with brains…with tonal inflections from the Big Easy, central Africa, the Maghreb and the Baltic states.”  Underground Horns has performed internationally in Egypt and Germany. Here in New York they’ve made people dance in subway stations, parks and at their numerous dates at venues ranging from Nublu to Lincoln Center, Barbes to Brooklyn Bowl, not to mention last year’s sold out show at 92YTribeca. The band has also played as a marching band, namely at the spectacular NYC Village Halloween Parade.

The band can be seen performing around the city at venues such as Rockwod Music Hall, Arlene’s Grocery, Sidewalk Cafe, American Trash and The Bowery Electric. Cool Papa Bell plans to release their full-length debut album in Fall 2013.

Ras Moshe is a well known denizen of NYC’s downtown scene, a beatific presence whose laid back deportment stands in stark contrast to the intensity of his musical delivery. A recognizable son of Coltrane in terms of harmonic dexterity, restless curiosity and soulful commitment, Moshe has nevertheless developed a light touch and bemused sense of humor uniquely his own

You can order the  from: http://straw2goldpictures.com/