While the Vision Festival stands out as perhaps the preeminent vehicle for experimental, improvisation-based musics in the nation, it has also been controversial in its dogged pursuit of star-status performers that are can draw large audiences. Sad that the scheduling continues to make lesser-known performers feel closed out but one cannot deny that the organizers know how to program concerts that never fail to blow the roof off of the house. This year’s Festival was packed with brilliance but time constraints allowed me to choose but part of one evening and so, as legendary harmolodic guitarist Bern Nix has finally been called to the Vision stage, I couldn’t miss this one. Happily, the noted poet Steve Dalachinsky, a welcome mainstay of Vision from the start, had the opening set of the evening, one he performed with long-time jazz pianist Connie Crothers. This pairing of spoken word/piano and guitar-based combo appeared to be opposing forces initially but the evidence was in quickly, proclaiming that this was another Vision Festival bit of programming genius… 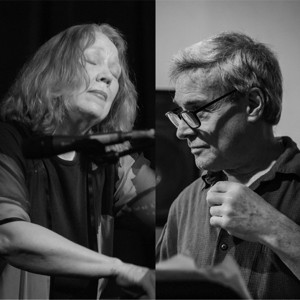 Steve Dalachinsky stepped forward and, positioning the mic around his cherub-like smile, told the audience that he is “…hungry, thirsty and nervous—so if this doesn’t work out as planned, I already have my excuse in”, but Dalachinsky never had reason to make use of this disclaimer. Embarking upon a solo statement of verse initially, he was joined by Connie Crothers’ probing, compelling piano only as the second piece developed. The musical landscape Crothers provided offered jarring 20th century music runs which almost leapt from nowhere yet made so much sense to Dalachinsky’s often surrealistic strings of logic. The poet pounced upon and danced around his own verse, seemingly davoning over the microphone, infusing stutters, repetition, vocalization and moments of Brooklynism as needed.

The stories within Dalachinsky’s poetry are gifted with a loosening of association, at once flowing, staccato, urgent, breathless and fearless. A sense of improvisation pervaded all, no matter that the lines were being read from a page. It is HOW they were read that brought the piece into the next realm, how the words tangled and tangoed with the music being created of the moment about them. The overall effect was a tapestry of sound embedded in Crothers piano and the liberated harmony of the eras of the modern and post-modern. But the pianist effortlessly slipped into an expansive face of jazz just to pull us all back into it, as Dalachinsky masterfully worked a sentence, propelling it into the space above them and beyond the confines of the venue.

THE BERN NIX QUARTET came onto the stage of Roulette as the house lights were up high and the audience was stretching between acts. Before the MC had the chance to announce them, sound check blurred into performance, and the warm yet almost percussive sound of Bern Nix’s guitar permeated the room. This subtle, circling chord progression was quickly joined by Francois Grillot (bass) and Reggie Sylvester’s (drumkit) now swinging, now rolling rhythmic counter-point. Matt Lavelle’s trumpet pierced the air pointillistically, filling the spaces of this seemingly impromptu piece, one we would later learn to be, appropriately, “Don’t Try So Hard”. As the lights rapidly dimmed, the band was introduced, in style, over their slowly building soundscape. The piece developed into classic harmolodics as Nix, hunched over his well-aged Gibson and almost obscured by his music stand, dug in. 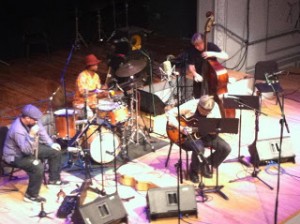 Grillot and Sylvester bring something new to the terrain carved out decades ago by Haden and Blackwell. Nix’s years with Prime Time are not lost to this rhythm section which can sound as funky as that electric ensemble though Grillot plays upright (and with monstrous technique!). And Sylvester, while offering a perpetual motion burn, does so most often with bundle sticks in place of standard drum sticks; heftier than wire brushes, they give a rather non-direct attack. The drummer’s easy, acrobatic style made me think of the nimble flights of a barefoot tap-dancer. Lavelle’s trumpet breathed over the whole, giving off scat-like flurries and Cherry-ish half-valve slides. The band began cooking immediately but was sure to build the boil in different places and not necessarily all at the same time, casing the sense of center to keep moving about, as it should in this lexicon.

And yet the second selection, “Under the Volcano”, had the Quartet in gut-bucket mode with Sylvester leaning into the straight 8ths and Grillot slapping the body of his bass in patterns that pushed the pulse ever forward. Lavelle, moving to alto clarinet for this number, played a composed melody line with the leader, but once tearing into his solo offered a siren wale that catapulted him outward. At times, Lavelle was reminiscent of Sonny Simmons forays into double-reeds, pulling the sound from the high end of the instrument’s range and from deep within himself. As Nix came into his own, the R and B backbeat gave way to free—affixing the vibe of the original Coleman quartet to that of the guitarist’s tenure with Prime Time. This band acts as the nexus of the two eras we have come to know in the harmolodic sphere. After the concert Nix explained:

“I always had a penchant for straight-ahead jazz guitar playing; I play that still. Before I worked with Ornette, I never thought I would be in Prime Time. But this music allows the harmony to shift, like chase chords, moving through and beyond. It is in and it is out…the ‘swing’ is always there. This music is an extension on the early jazz tradition where the sense of freedom, the improvisation, was constantly creative. Here the band’s roles are never static and are always shifting, evolving…”

The band played two more numbers including a pseudo-bossa (“Naomi”) with a trumpet melody that exposed Lavelle’s big band influences, full-bodied and sporting a vibrato that ended phrases deftly. His solo straddled the worlds of Harry James and Woody Shaw with ease, fingers flying over valves, resounding. And just as this piece seemed to approach the straight-ahead tradition, Nix’s solo brought in atonality (or was that beyond-tonality?) and an expansive view of meter.

Bern Nix’s solos are really an extension of his comping style as he grabs barking, snapping single notes, diads and chords up and down and then across his instrument’s neck, toying with repetitions before tossing them aside for lines in advanced tonality. Kandinsky-esque staccato phrases and linear, slippery runs alternate as the rhythm team pulsates contrapuntally behind and through. Driven on by the improvisation of the moment, the drummer and bassist fly and bounce, skimming over the surface of the groove when not tearing into it and turning it on its head. Add Lavelle’s free trumpet into the collective mix and the band appears to be working from four different centers, creating a jigsaw melody almost played heterophonically between guitar lead, trumpet and bass counter-melodies and the racing back-stroke of Sylvester’s almost 4/4 jazz time. The Bern Nix Quartet is everywhere and exactly-where and the overall effect is dizzying in the best possible way. This is the next obvious step in the harmolodic world. To the uninitiated, this visionary music can be somewhat confounding. To those who know better, this stuff is pure sustenance.