Review and photos by Dawoud Kringle 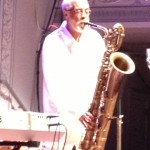 harmonics rumbled under the crystalline notes of the pianos and percussions, which inverted itself into a möbius vortex of sound. The bass took the initiative in the form of a frantic walking bass line, and the others accepted this challenge; riding the velocities with confidence and clarity of vision. Then, the synth took us to interstellar space, alternate dimensions; and the band followed, riding the highways of the stars. When they returned to earth, they landed in the urban landscape of gospel/blues; and brought the perspective of their transformational experience. After speaking to the audience, Hamiet played a solo. This became a arugula back and forth with the keys, which evolved into a blues, which evolved into a shamanistic gospel. At times, Whitaker (one of Jackson’s students) actually dared to lead/conduct the band, giving directions and cues to the others. A hungry young man, indeed. The music continued to evolve in intensity. It was beautiful.

Next was Mario Pavone ARC Trio MUSIC (Mario Pavone, bass, Craig Taborn, piano, &  Gerald Cleaver, drums). They began with a spacey, yet substantial opening. Creating an atmosphere that established their own musical identity after the intensity of Bluiett’s performance. After an excursion into the realms of free jazz invocation, the bass took a solo. The trio brought it back to itself, 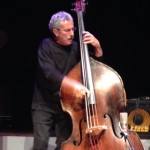 and ended. They continued with a more aggressive improvisation. The drums took a poetic solo that flowed over its occasional punctuational; and the band eventually came in with an ending that was more lyrical than the piece’s beginning. Then they launched into a jagged, whole tone based head which the piano layered with quartral chord harmonies. They navigated this angular terrain with ease and passion. The piano solo layered angular harmonies and irregular accents over the insistent rhythm, like juggling broken glass in zero-G. The bass solo attacked its own chords like a boxer luring his opponent into a rhythm, only to throw unexpected jabs and hooks. This was how it ended. The next piece was more somber and lyrical, with the bass taking the lead. The drums took over, weaving its sounds in and around its own pulse. The bass would comment, and soon the piano came in with its own offering. This built to an energy of transcendence that drew the listener onto another reality.This continued with variations on a chord progression, and ended. They concluded with a piece opened with a walking bass line and morphing into a jazz trek into its own realm of pleasure and danger; and ended with unexpected abruptness. 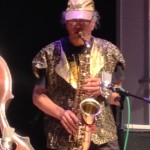 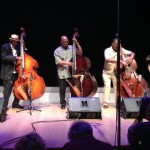 synthesizer, and Casio keyboard, Christian McBride, Lee Smith, & Howard Cooper, bass). A bass excursion opened the music. Allan (a veteran of the legendary Sun Ra Arkestra) wove his melodies and musical strange attractors over the perilously fragile yet solid counterpoints of the three bassists. This was, musically, a dangerous undertaking. Without the most intense sensitivity and awareness of the musicians, the music could easily have degenerated into cacophony or futility. This never happened. At one point. Allan made marvelous use of an electronic wind instrument (the likes of which I’d never seen before). He brought this arcane technology into a genre that largely eschews the use of synthesis, and made it work as if it has been an indispensable part of the tradition for decades. And the three bassists deftly exploited every acoustic possibility on their instruments,; approaching the free improvisation from the perspective of an ensemble, rather than three soloists. And when it came time for each bassist to take a solo, each one contributed something highly individualistic; yet never outside the musical world the ensemble created. All the while, Allan held his position of leadership over the music; leading by presence and perception as opposed to specific direction. At any moment, something could have collapsed; yet it never came near doing so; a true testimony to their mastery. They did a beautiful Coltrane inspired encore.

Throughout the performances, artists did live paintings and drawings inspired by the music, in real time.

In a time when mediocrity is the selling point of music, true artistry should be supported. And the musicians need to support each other. We can expect little help from others; all we have is each other. Arts for Art, and their supporters, are to be commended for organizing this wonderful display of musical mastery; and for showing us it’s possible to claim our own power.