Review and photos by Ancelmo James 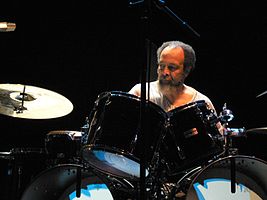 This past Wednesday evening I entered the Roulette, a very nice, perfectly sized theater on Atlantic Ave just about where it intersects Flatbush Ave with no idea of what to expect from the night of music ahead of me. Prior to going, I had never heard of Milford Graves, although I suppose it is very possible that his music has slipped through my ears without knowing at some point in my lifetime. That said, being a drummer myself, I was excited to experience whatever lay ahead.

Before I give any opinions or reviews of the music let it be said, that, in my understanding, the evening was a celebration of Dr. Graves’ lifetime achievements – not only his music, but his contributions to humanity through his music, as well as, through his teaching and research. As I gather, said contributions and achievements have been ample in Milford Graves life. From there it would be prudent to point out that a recurring theme throughout the night – and Dr. Graves life – was that of his openness of mind, of heart and of ear. This openness is a state of mind and a state of being – and for this I can say with much respect and admiration that Dr. Graves has earned the praise and acknowledgement that he has received. 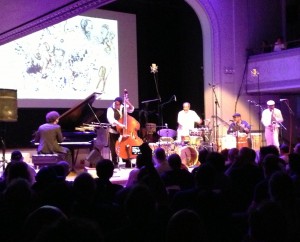 The evening was organized into three parts/movements/time periods/bands – that exemplified each era of Dr. Graves music (generally) – the first being his Afro Cuban Roots. This group of musicians (Milford Graves on drums & perc, David Virelles on piano, Roman Diaz on perc & vocals, Dezron Douglas on bass and Roman Filiu on alto sax) played, for the most part, what one might expect from an Afro Cuban band – rhythms, and percussion that encapsulate the feeling of the music – an upright bass, and piano, as well as an alto sax. This first part of the evening, I can say, I enjoyed the most out of the whole night. If for no other reason that the music was grounded in a cogent rhythm, a danceable groove.

From there the second act took the stage – the Milford Graves Transition TRIO. The music of the trio (Milford Graves on drums & perc, D.D. Jackson on piano and Kidd Jordan on tenor sax) is what this writer dubs “art house” music, what others may consider avant-garde, or “free” jazz. Whatever you might choose to call it, with all the respect and admiration in the world, it pretty much just sounds like noise… it is free for free’s sake and seemingly nothing more. The amount of communication musically, or playing off of one another, or “gel-ing” as it were, is undiscernable. I feel the need to assert that not only do I like music that “take’s it out there” but I also say none of what I write do I write with negative feelings towards any of the musicians or what they stand for musically. 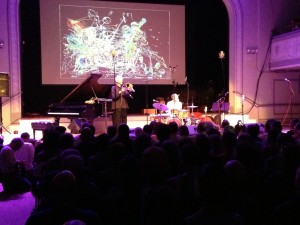 What I found as a testament to my previous statement is that the third act – the Milford Graves NY HeArt Ensemble (Milford Graves on drums & perc, Charles Gayle on tenor sax, William Parker on bass, Roswell Rudd on trombone and the poet Amiri Baraka) – was literally the same business, only with the occasional spoken word over the cacophony. Some may make the analogy that there are people who look at a Rothko or a Pollack and simply don’t understand what’s in front of them, while others are so deeply moved they are willing to pay $200 million for such a painting. Or maybe, simply, it’s just not “my thing” – either way I wanted to enjoy the music, truly, this time the connection just wasn’t there.

One more point worth making, as a drummer, I found it interesting that Milford Graves plays a snare drum with no snare, and that all his drum heads are tuned so low they’re practically sliding off the drums themselves. Again – I find this to be much more effective and powerful as an expression of what Milford Graves stands for as a human, as a doctor, as a person who believes in opening your mind to greater possibilities and looking further to the horizons of humanity. As a drummer, I don’t like it. His drums sound dead, lifeless, devoid of any punch or tone, again personal preferences play a part and everything I write is really of no consequence in the grand scheme of things anyways so I write what I write because this is how I perceived and experienced this evening of music.

For what it is worth I am glad I was able to witness Dr. Graves on such a night and with so many people that not only respect what he has done and continues to do but who enjoy it as well, and despite everything I’d rather have been there than not.