Some thoughts by Sohrab Saadat Ladjevardi

Are street musicians different from other musicians, such as jazz, Broadway, western classical or rock musicians? My answer is NO!  A musician is always a musician. You can be “just” an entertainer or a “serious” musician or even being a music activist like me…but we all have the same purpose of doing music either “indoors” or “outdoors” which is to tell stories.

We all do the same job which is customer service. I know of musicians who don’t like street musicians and can’t appreciate their contributions to the community. (I did have this experience when I was playing my saxophone in Central Park three years ago when Lou Reed and Lauri Anderson passed by, and Lou looked at me in a nasty way as if i was “air.”) Some of them feel they’re better than “them.” I can’t accept this attitude which is very disrespectful.

I believe they are as important as any other musicians for the community. Their contribution can be deep as a Coltrane, Beethoven or Jimi Hendrix. They can be as ironic and funny as a Fran Zappa. They can be more sarcastic than the SEX PISTOLS. They can be as critical as a Bob Dylan of the 60s. And they can be as funky as a James Brown.

Anyway, I love to see street musicians around me.They need to be treated with respect in the same way like Jay-Z. There’s no way that politicians and narrow minded people decide where they can play. They have a right to play anywhere in the city as far as nobody complains about them.

I think it’s the union’s and its membership’s job to protect the street musicians from any kind of political harassment. They should talk to some of them and convince them to be a part of the Justice For Jazz Artists campaign. They’re the right people to promote this campaign on the streets of New York.

Here’s one NY street musician – Isaiah Richardson Jr. – you should know and you might have seen him before in New York. I’ve been knowing for a while and we played twice times together: at one of my jam session at MICHIKO STUDIOS and at St. Nick’s Pub in Harlem. (Please check him out in the ALGEMEINER, published July 13, 2013.)

No Music Zones? City tries to tell musicians where they can and can’t play 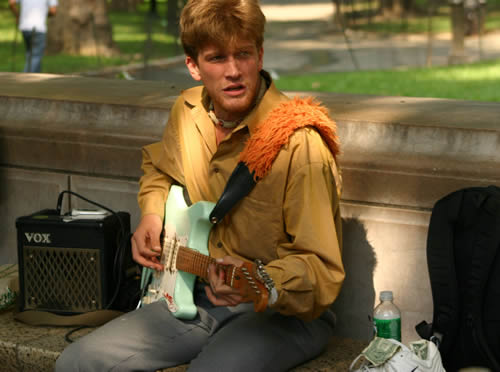 Under a new “clarification” of city parks regulations, musicians who want to collect donations in city parks must confine themselves to certain areas. Above, a guitarist called Gypsy Joe Hocking performs in Central Park.

The art of street performance, or busking, is something many musicians have experienced at some point. New York City’s public parks have long played host to musicians of all stripes, whether they just came out for a chance to play in the open air or because they make a living on the tips they earn. Go to any city park on a nice day, and you are sure to see countless musicians playing, both professional and amateur, both solo and in groups. However, the city’s relationship with musicians who perform in the parks hasn’t always been a smooth one.

In April of this year, the city announced a “clarification” of park regulations which would classify musicians and performers who solicit donations as “expressive matter vendors.”

These vendors are limited to special “medallion” locations in Union Square, High Line, Battery Park and Central Park, where they are allowed to sell their wares alongside those normally selling books, newspapers and artwork.

Even outside of those four parks, the rules state that expressive matter vendors must stay 50 feet away from any monument and five feet away from park benches, trees, and walls.