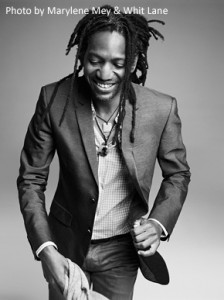 Villafranca was born in Pinar del Río, Cuba. He was classically trained in percussion and composition at the Instituto Superior de Arte in Havana, Cuba. He came to the U.S. in late 1995, he made a name for himself in the jazz and Latin jazz scenes. Based in New York City, he is also a resident professor at Temple University in Philadelphia, PA.

The band took the stage and began with “The Night in Isla Nega.” A blue piano riff and a samba-ish groove laid the way for a jazz head that flowed over a lush chordal progression. The trumpet, who had been standing at the front, all business, eased into his solo, and then came out swinging. The piano was like a waterfall, sometimes flowing, sometimes crashing; but never still or stagnant. The bass solo weaved its confident and lyrical groove in and around the changes.

The next song “The Great Debate” was inspired by the debate between Obama and Romney in the ’10 election (wherein, as I recall, Romney got his posterior handed to him). This was a smoother groove (though certainly not smooth jazz,,, ugh). The song was clearly meant to display a Zen-like calm in the face of adversity and outrageous affronts to reason. This was quite evident when the trumpet solo began. The band eased into a quiet minimal frame of the song, while the trumpet came in, like incense smoke with some Miles inspired touches, and the whole thing built to an unexpected display of poetry and skill. Then the drummer took a solo, with the piano and bass holding down an ostinato. His approach was as melodic as the rhythm. He somehow reminded me of a middle ground between Philly Joe Jones and Idries Muhammad; but he was clearly his own man. Everything he played the he night was effortlessly executed.

They continued with a song dedicated to Trayvon Wilson. The song has no title. The piano started with what was clearly a lament. The piano voicing he used reminded me of Bill Evans. Then the band came in. The trumpet wept, the drums were like raindrops, the bass offered its sermon, and the piano lamented the tragedy while reminding us of the impermanence of life, and hinting at the sense of the eternal.

The next song,“T. S, Diablo,” was about Stafford’s love of spicy food , which Villafranca doesn’t like. The song began as a playful, almost comically campy romp, and transformed itself into uptempo bebop that burned like Stafford’s beloved hot sauce. 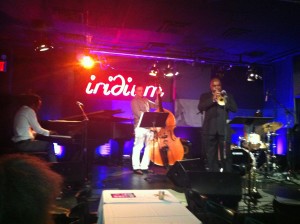 They finished with “Illustration of a Transcending Heart” a song they’d very recently premiered at the Chick Corea Festival. This was an introspective meditation in 6/8. Parts of it reminded me of a fractal reflection of Satie, but then veered off in unexpected directions. It morphed into a mid-tempo groove with a brooding overtone. The entire song was executed by the band as a collective and as individuals as if their lives depended on it. Beyond that, it was something akin to philosophical discourse; no different from a gathering of friends with brilliant minds exploring arcane and recondite ideas: except that they spoke with their instruments, in the language of jazz.

The did an encore; “Blues for Paola”, dedicated to Villafranca’s mother. This was a blues in an almost Cuban style (yet the Cuban element was more of a subtext than something you heard on the surface). The trumpet really shined on this one. You could tell he really meant what he played. The piano solo was played with the kind of delicacy and forbearance one has with one’s mom; especially when she reaches an advanced age. The bass’ sole interest was seemingly in extracting the spirit of the blues. The end was a strange and refreshingly unexpected abstraction of the blues form.

Elio Villafranca is, as a pianist and composer, an artist in every sense of the word. His compositions are engaging, imaginative, and communicate easily with the listener, and his piano technique and improvisations are flawless and poetic. The others in his group; Stafford, Owens, and August are similarly brilliant musicians. Their performance let you know you were in the presence of men who have mastered their art.

This was the first time I visited Iridium at its new location near Time Square. The old location, at Lincoln Center, was subtle, dignified, and tasteful. The new one is flashy and elitist, with walls covered with mostly gaudy memorabilia imaginable, most of which bears no resemblance to the jazz tradition (i.e. guitars signed by the likes of Richie Sambora and Slash, classic rock album covers, etc.). There were many tips of the hat to the late, great Les Paul (who used to play there every Monday until he passed). The food was good; the Kobe burger I had was quite tasty, with generous portions; but it was difficult to keep warm with the AC blasting its arctic incentive for the patrons to keep drinking. The service was exemplary, effectively contrasting the questionable taste of the venue’s decor. The whole vibe was that of a money generating jazz-Disneyland trying too hard to impress the clientele with its own musical pedigree than a place to present and perpetuate great art.