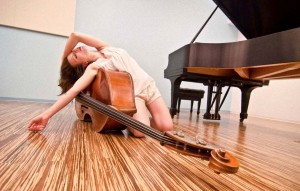 “Born,” the first track on the CD opens with a synth pad over which Cordero’s vocals invoke a brooding minor melody; effectively ripping to pieces the preconception of this being your typical jazz recording.

Holly Ann Cordero is a bassist, composer, performer, multi-instrumentalist originally from Columbus, OH. She began her musical training at age 5, and has since been learning, exploring, and creating a name for herself in the competitive world of the New York City jazz scene. She cites the likes of Ornette Coleman,

After the CD’s opening, “Act 1 Scene 1” presents few notes from Cordero’s bass, sharp stabs from Renato Diz on  piano, with string section (Chia Yin-Ma, 1st violin, Yut Chia, 2nd violin, Alex Wong, viola, Shayne Lebron, cello, and Bobbie Crowe, cello) in the background pave the way to a post modern “classical” piece (how strange to use that word “classical” for music only a few years old). The interplay between the piano, bass, and strings explore the nuances, notes and textures of the piece’s themes, at once caressing them like a lover, and searching as if on a quest for a lost treasure.

The third piece, “Hit It“, starts out as if it had morphed from the previous piece, and becomes a jazz song. I ask the reader to picture what Miles Davis form an alternate universe would sound like had he played bass and come to age in the 21st century. This song, a quartet of bass, Robbie Mack (alto saxophone), Steve Picataggio (drums), and Diz (again on piano) has a lot of space, and allows the music to unfold on its own terms.

This is followed by the string ensemble (there’s that “classical” thing again) called “In Time.” Long tones draw harmonies from out of hidden spaces, and with each second, a new delight, a new pain, a new experience emerges.

Out of nowhere, “jazz” emerges once again. “Go Get ‘Em,” is a quirky, angular swing with a complex unison flying over the groove. The piano did some marvelous twists and turns with the structure, talking it to unexpected places. The saxophone was lyrical, and brought out some interesting cries and yells toward the end. The bass solo danced playfully around the intricate jazz harmonies and answered the swing that helped define the piece’s life. The drum solo traded fours with the instruments in a classic jazz form.

Another jazz piece followed; “Simple Splashy/Take an UnEasy Step.” This started as a ballad; a moody lament that struggles to seek the triumph of joy over sadness. The head has some interesting twists and turns one does not expect in a jazz ballad, with a subtext of an incomplete conflict resolution. The bass solo was delicate, and enunciated each note with the care of a diamond cutter. The piano solo began in a similar vein, and brought out (or responded to) an unexpected swing that the drums produced. Around the middle of the song, the music deconstructed itself in an emotional catharsis of barely controlled chaos before lifting itself out of the mire into a Latin jazz swing that beat its chest in triumph over the fallen enemy of its own sorrow. After a playful piano solo, the sax came in, offering its consolation and words of wisdom. Another bass solo played with slightly more abandon than the previous one completed the communal statement, with the piano occasionally offering a comment, or joke. After a while, the song rides on a classic dominant chord groove until the journey was completed; never returning to the lament from which it came.

Nothing that happened on this CD can prepare the listener for the next track, “Life.” A backwards and heavily processed sitar over which Cordero recites a poem about the difficulties of facing opposition to realizing your life’s destiny. The sitar re-emerges in its real form, and the poem takes a more optimistic tone. Out of nowhere, a guitar plays lush chordal melodies, which collapses into chaos and reassembles itself; out of which, a sitar statement emerges. The sitar bows out and a flute steps in with a Zen-like koan, with occasional nods to Debussy and Ravel. This gives way to a Cage-ish foray on piano, eschewing the traditional approach. The piano steps aside to allow an udu drum to enter. A cymbal splash heralds the coming of a brief sax line that kinda-sorta quotes Coltrane’s “A Love Supreme.” This is followed by a variety of sounds, vocal performances, a heavily processed dilruba, berimbau, violin, trap drums, flutes, percussion instruments, sitar and other sounds (contributed by Jimmy Lopez, assorted percussion, Elsa Nilsson, flute, Blake Allen, viola, Cara Blakeslee, vocals, Rafael Rosa, guitar, Renato Diz, piano, James Miglia, saxophone, and Dawoud Kringle, sitar and dilruba). The piece was an audacious (no pun intended) sound collage painting that carefully read the “Rule Book,” tore it to pieces, threw them to the wind, and followed its own abstract pilgrimage. Its only weakness being its length, and occasional descents into silence; which some listeners may lack the patience and open-mindedness to allow it to unfold as Cordero intended.

The CD ends with an “Kifo,”an African-esque vocal chant accompanied by Carlos Duran on percussion. “Kifo” is a Swahili word meaning death; yet (after reading a translation of the poem) it shows death as a welcome entrance into a higher state of being, rather than a fearsome, painful, and futile end.

There is a sense of mystery in this collection. The CD jacket shows a photo of Cordero posing with her instruments. No text. The text on the CD itself is similarly minimal; as if she wanted to create an air of mystery and deflect attention away from the musicians toward the music itself. A vibe permeates this music hinting that Cordero and her musical colleagues are in possession of a great secret, something deep and arcane that most people may have trouble understanding because it’s so off the beaten path; and they are taking their time explaining it, because understanding it is absolutely necessary.

Cordero has crafted a unique masterpiece. I imagine we may expect more works of genius from her.