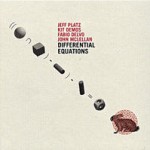 An angular bass line over which an asymmetrical, almost palindromic head is played by saxophone and guitar introduces the opening track “Carribean” on the CD Differential Equations.

The next track, “Bell Clear” has a more flowing, gliding quality. propelled by a frenetic bass line and post bebop drumming. The guitar solo stabs at the listener with chords like the edge of a broken bottle in a barroom brawl. The sax solo seems more like someone trying to break up the fight; that one guy in such situations who remains clear headed. Yet, the guitar continues to argue with him. Toward the end, however (especially after the drum solo), the two come to terms, and the song ends peacefully.
“Bill Burroughs” begins with some rubbery bass sounds in registers flirting with the lowest thresholds of human hearing. The drums put support under it, seeming to imitate those subatomic k-meson particles that travel forward and backward in time simultaneously with its accents. On top of this melange, the saxophone plays its own encoded messages, and the guitar and electronics hang bizarre inectile ornaments in strange places. Bill would have like this one.
Other highlights of the CD include “Sonar” (a piece that begins with gentle notes placed with a diamond cutter’s care in sonic bezels. “Il Momento Guisto” which starts as an almost danceable groove, but soon bifurcates into fractal permiations before reassembling itself. “Onde E Lamenti Dal Cosmo” begins with harmonics on bass, and glacial, almost Hendrix-like chords on guitar, and evolves into a painfully contemplative meditation on forces beyond resistance and comprehension.
This CD is not for the faint of heart. Casual listeners and those with stylistic prejudices need not apply. This is a treacherous expedition of the deepest labrynthian reaches of the musical consciousness. Some would call it self indulgent; but this is not true. It is self introspective. It unapologetically sets its own standards, and plays by rules it determines, sculpting sound like that scientist or mathematician whose ideas are so recondite that only a handful of people truly understand it; but in the end, everyone realizes that Differential Equations were right all along.