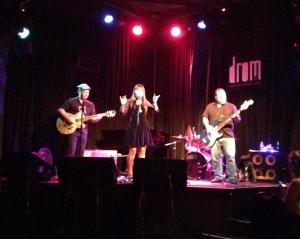 Review and photo by Ancelmo James

The other night I went down to the east village to check out The Cambodian Space Project (CSP), a band whose sound is so incredibly nostalgic and reminiscent of surfy, British 60’s rock one might think they traveled through time from the past, or that they record soundtracks for Quentin Tarantino on the side. Either way, CSP music takes you back.

The band, or at least the incarnation I witnessed, is comprised at the core of co founders Srey Channthy, the Cambodian born lead singer, and Julien Poulson, the band’s guitar player from Australia. I believe that the rest of the band’s line up changes or morphs depending on the show or continent in which they are playing. The band opened the show with a beautiful vocal arrangement by Srey backed only by Poulson’s guitar. The lovely yet sad song, as is the case with many of CSP songs, was a reflection of the turbulence and violent history of Cambodia’s recent past/modern history. The civil war and subsequent genocide and severe political oppression of Cambodia’s people that flared in the 1970’s obviously gives great substance and context to the music, arts and culture that come from the country and its people today.
With CSP this is no exception. Srey’s personal history is staggeringly intense, and, along with the adoption or infusion of western music, specifically rock and roll, from the 60’s and 70’s we see the synthesis of the Cambodian Space Project’s sound. Through the civil war and genocide in Cambodia, the government banned music and more or less the arts altogether. Crazy. The style of CSP and many of the cross cultural bands of Cambodia without a doubt reflect the resolution or continuation of the styles that were popular when all of this madness occurred. Poulson’s guitar tones evoke big time southern California and British Rickenbacker vibes.
At moments during the show at Drom I closed my eyes and I almost felt like I was cruising down Sunset in an oldsmobile convertible with Harvey Keitel and Michael Madsen. There’s a wonderful simplicity to this style of music when, coupled with the lyrics and voice of Srey become immensely powerful. Of course, I had no idea what she was singing, although through her explanations, and my limited understanding of the band’s history and context, I gathered the song’s messages were reflections of a dark past and hope for a bright future. I liked The Cambodian Space Project a lot. The strength of the band very much lies in the voice and presence of Srey, and it says a great deal when a band, like CSP, makes music that has such a real and substantial context and message behind its music. There are so many bands today that stand for nothing, and that’s okay too, but The Cambodian Space Project will indeed take us on a trip to the past, the now, and the future, and that is nothing short of 4th dimensional magic.