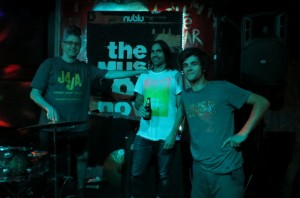 Review and videos by Dawoud Kringle

One muggy August night, SoSaLa returned to Nublu; but in a different form. Rather than the usual world jazz / Iranian quintet their audience had grown to know, they surfaced as a power trio. Joining bandleader, saxophonist and vocalist Sohrab Saadat Ladjevardi was Lautaro Burgos on drums & percussion and Greg Zweiben on electric bass.

With mallets in hand, Burgos pounded out a controlled rampage over which Zweiben’s heavily overdriven bass guitar rained sheets of sound on the audience. Then Sohrab’s saxophone came in and built a solid melodic exploration over the surgically channeled chaos.

They continued with a jagged off beat groove. The sax laid down it’s statement. Ladjevardi began his spoken word rant about the society around him as he sees it, and then let his saxophone have its say in the matter.

SoSaLa played some songs from their usual repertoire; but, owing to the stripped down instrumentation, the interpretation went in a very unexpected direction, mixing funk, free jazz, heavy rock, blues, punk, and the inevitable maqam with reckless abandon.

Burgos presented a solid and brilliant performance. His command of the drums was sharp, imaginative, and powerful. Zweiben was the most innovative of the trio. His use of effects presented a powerful and varied sonic palette on his bass over which Ladjevardi placed his compelling melodies. The interplay between the bass and the drums was telepathic and intense.

Ladjevardi was as brilliant and commanding as always. His saxophone virtuosity presented a sharp contrast and at the same time a perfect compliment to his idiosyncratic, defiant, and worldly wise persona – which is no act. Ladjevardi’s rap to the audience is just as much of a part of the SoSaLa performances as the music itself. He spoke to the audience about the economic plight of the musician. His impassioned stance is that musicians should be treated with respect and earn what our music and efforts are worth. Ladjevardi is an opinionated yet compassionate man. To him, music and life are one and the same.

I’m glad I attended this performance. I’ve heard SoSaLa several times live. They were always great. But this performance was extraordinary. Passionate, and almost frightening in its intensity; dramatic in a way that rock and free jazz used to be. I couldn’t help but be reminded of vintage Cream concert videos I’d seen. This incarnation of SoSaLa as a trio had that kind of power, and extended it to a very different musical realm.