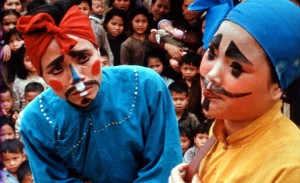 Films against war can never go out of fashion, and this revival of the (mostly) French ‘new wave’ directors’ collective protest against the Vietnam War in 1967, restored by the Archives Françaises du Film (CNC) in collaboration with SOFRACIMA, needs no excuses. A classic example of what documentary historian Erik Barnouw has called guerrilla filmmaking in its angry, violent denunciation of American aggression in Vietnam, the co-operative project brought together Agnès Varda, Joris Ivens, William Klein, Claude Lelouch, Jean-Luc Godard and Alain Resnais, co-ordinated by Chris Marker, who mobilised 200 technicians, cameramen, editors and the like for more than four months to knit together imagery of the war, interviews, intellectual styles, fictional incursions and documentary footage in a bid to counter and interpret the intensive media coverage and propaganda manipulated by the American government. Necessarily dated and unwieldy though the film may now seem, it was a group film-making effort unique in the cinema’s history and remains a powerful and passionate plea for peace. William Klein summed it up thus: ‘How to make a ’useful’ film? Fiction, agit-prop, documentary, what? We were never able to decide, but we had to do something.’ The film has been restored from the original reversal 16mm print and blown up to 35mm. — bfi