Honestly I still don’t know whether Bill De Blasio is the right candidate for NY’s musicians. (The other candidates aren’t better.) Every time when I listen to his speech he never speaks about musicians’ issues, such as fair pay scale, pension contributions by the club owners, importance of music  in everyday life, music education and music entertainment/service. So I still can’t recommend him. If he becomes mayor I try to remind him – of course with the help of my union which endorsed him – of his unspoken promise to improve the lives of  musicians in NY….What do we want? Justice For Jazz Artists!

I think whoever wins the election means nothing for us musicians. We still have to continue to fight for our rights with or without our union! 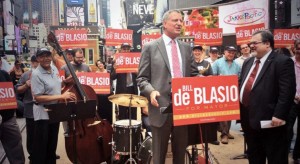 As you know, Local 802 has endorsed Bill de Blasio for mayor of New York City.

JOIN LOCAL 802 AND BILL DE BLASIO SUPPORTERS at the West Indian parade this coming Monday, Sept. 2. Show up at 10:30 a.m. and look for the Bill de Blasio signs near the front of the parade. Meet at the corner of Eastern Parkway and Buffalo Ave in Crown Heights, Brookyn and march west on Eastern Parkway to Flatbush Ave.

SAVE THE DATE: On Tuesday, Sept. 3, at 5:30 p.m., we are asking Bill de Blasio’s supporters to come to 30 Rockefeller Plaza to support Bill as he participates in the final mayoral debate before the election.

THE BILL DE BLASIO CAMPAIGN NEEDS VOLUNTEERS to make phone calls, knock on doors and do what it takes to win. If you want to help out as a member of Local 802, click here.

DON’T FORGET TO VOTE! Election day is Tuesday, Sept. 10. To find out where to vote, or with any questions about voting, you can call 1-800-FOR-VOTE, or visit www.elections.ny.gov.