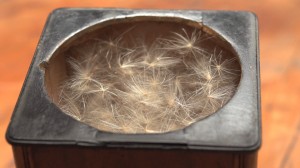 (photo from “Nugatory” by Augusta Palmer)

Video By Night…Featuring artists who use video as an expressive tool, letting it develop out of their art practice in an integral way. Curated by Jeanne Wilkinson – Artists’ presentations at 7:30 (Stills on this email from Nugatory by Augusta Palmer)

Rooted in sensory ethnography, kinesthetic exploration, and historical research, Bliss’ practice investigates the complex relationships between body, place, language and memory. The Poetics of Skin (2012) grew out of a collaboration with sculptor Rosalyn Driscoll where images of two lovers were projected onto forms made from cattle rawhide. The layering of flesh on flesh – dead and alive, flayed and intact – deconstructs presumed boundaries between forms of matter, focusing on connections. The lovers, meanwhile, engage in their own struggle to come to terms with impermanence. Bliss has been awarded an Alchemy Film and Moving Images residency in the Scottish Borders for October, 2013.

This short is inspired by the work of Leo Rabkin, a 94- year-old New York artist, who creates what he calls “nugatory divagations” using materials that might be viewed as worthless (nugatory) to create unexpected experiences off the beaten track (divagations). Rabkin’s work balances on the razor’s edge between abstraction and representation, which this video short explores through kinetic movement, animation, stop- motion, shifts of focus and abstraction. Nugatory explores how we make meaning out of nothing.

Solstice: The Sun and the Horn is a kind of cave- painting for the new millenium, an homage to the time when the beasts ran free and people moved to the rythms of “the sun and the horn.” The installation, shown at Trestle Gallery in June, used two projectors and image streams, one for the sun and one for the beasts, that overlapped and interacted in an ever- changing sequence. Two hanging translucent scrims formed a tunnel where people could experience the imagery from the “inside,” some using masks or headdresses. From this event, a short film was made.

Clapp’s work includes sound pieces, videos, sculpture and multimedia installations. His most recent body of work explores memorable imagery from movies seen during childhood through video sculptures. The pieces from Dirty Talk, 2010 embody what he describes as his “seemingly universal dissatisfaction with past intimate relationships.” After receiving his BFA from Florida International University in 2001, Daniel has been living and working in Miami and New York.

Karl Erickson’s interests include motivational language, repetition, transcendental experiences, science-fiction, psychedelia and counter-cultures. He uses various media such as video, posters, collage, latch-hook rugs and pillows. Erickson was part of the Summer Solstice 2013 Arctic Circle Expedition, exploring the international territory of Svalbard, an Arctic archipelago just ten degrees from the North Pole. Aboard a Barquentine sailing ship, he worked on We Could be Transcendent Apes which explores the drive to evolve beyond our current state of being, a project inspired by Zen Buddhism, rave culture, and the film Robot Monster.