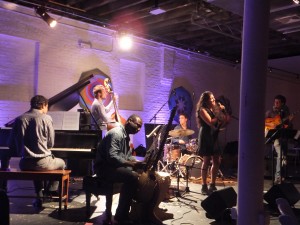 On an autumn evening. Brooklyn’s Shapeshifter Lab opened its stage to Visions, a world jazz ensemble led by Kavita Shah.

A guitar figure led the way for tabla and kora to place their sonic ornaments. Then Shah’s vocals slipped in, and stood gently atop the groove. A kora solo of bittersweet passion (evidence of unsuspected possibility in the traditional African instrument) took over, then made way for a romantic piano solo; the kora offering comments. Shah returned, and her cool, understated jazzy vocals led the song to an unhurried conclusion.

The band were all very good musicians. Shah’s vocals can best be described in terms of alchemical elements; she was Air and Water. Mintus was marvelous. Fluid and passionate, he brought wonderful colors and moods to the compositions. Flouzat had a smooth feel, and interacted well with Cellucci. They seemed to be holding a private musical conversation on the side. Just as the percussion had their interaction, so too with the strings. Sissoko and Valeanu had a marvelous interaction. They blended well, and there were brief moments it was difficult to distinguish them. Valeanu has a very interesting and compelling style; his jazz foundation is obvious; but he seamlessly infused country and quasi-eastern flavors into the solo. Sissoko displayed the ability to smoothly go in and out of the traditional kora styles with ease, and knows how to make the kora work in a variety of musical styles. Anning provided a solid, yet unobtrusive axis around which everything revolved. O’Farrill’s style on trumpet is dark toned and smoldering with passion. If Shah is Air and Water, he is Fire and Earth.

After some fine songs, Adam O’Farrill sat in on trumpet on a few songs. The tabla began with a solo, soon joined by drums. Shah began singing an almost singalong figure. After the guitar solo, O’Farrill went into a powerful solo that drove the rest of the group into unexpected directions.

This was followed by a lovely groove with the bass, kora, and piano creating a delicate atmosphere. This coalesced into Joni Mitchell’s “Little Green.” Shah sang Mitchell’s story. The kora solo was wonderful. Then, the piano solo took over. At one point, it seemed to try to seduce a blues feel at one point, then changed its mind and returned to the original vibe of the song.

The next song featured kora and tabla. After a brief solo intro (that unfortunately ended before its full beauty could be appreciated), the kora began a figure that formed a counterpart with the piano; with tabla playing Indian rhythmic patterns under it. After the verses and choruses, a piano break showed the same vibe in a different perspective. The tabla and bass returned to the song, and the drums and guitar joined them, bringing in a new vibe. The guitar had another moment to contribute his brilliance.

They finished with an original called “Moray,” inspired by the ancient Incan ruins. The composition moved in concentric circles, and played wonderful rhythmic tricks which the band executed flawlessly. This was the only time bassist Anning took a solo; and he deftly weaves in and around the rhythmic implications. His solo was all too brief. The last verse gave way to an ostinato over which the drums released a solo of such power that almost nothing he’d played earlier prepared the audience for it. And it too was all too brief. 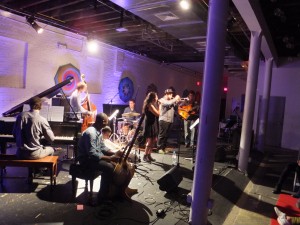 This music is jazz: jazz in its modern sense (as opposed to more classic forms). The “world” elements notwithstanding (“world music” is a ridiculous label, to be sure. But I will save this argument for another day), there is nothing else this music can be called. The songs were brilliantly composed and performed with as much passion as skill.