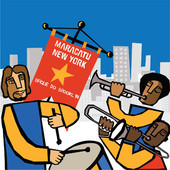 I have the good fortune to hear and write about a lot of good music, both recorded and live, for DooBeeDooBeeDoo. It is an extra nice treat, thus, to be moved by a new band even more than usual; thus was the case with Maracatu New York‘s album Baque Do Brooklyn, an energetic and percussion-heavy creation.

Little known in the U.S. until recently, Maracatu is an Afro-Brazilian style of music from Northeastern Brazil, originating in the slave communities that existed until the late 19th Century. It is quite unlike the Samba and Bossa sounds often associated with that music-rich nation. Maracatu ensembles consist of many, many drummers (50-150 is common from what I can find), as well as singers, dancers, and characters.

Maracatu New York is led by drummer and percussionist Scott Kettner, formed after he was introduced to the music by Billy Hart. With little information available in the U.S. at the time, Kettner moved to Brazil to “immerse [him]self in the music and culture of maracatu,” discovering the similarities between the music he was living in and the music of the American Deep South. While his other project, Nation Beat, has more of an olio of musical ingredients, Maracatu New York hews closer to traditional maracatu, while still wearing numerous other influences on its sleeve.

Of the 12 tracks on Baque Do Brooklyn, five are percussion-only. The first of these is “Parada,” the third track on the album. As on all of the drum pieces, there is a strong African connection in this, as well as a bit of New Orleans Second Line on this particular one. Listening, I had a strong feeling of the common roots of this music in the geographically-dispersed forcible African diaspora. The next percussion track, “Baque de Brooklyn,” provides a good example of the call-and-response between the various drummers, and subsequently their ability to lock into each other as a unit. On “Baque,” I was impressed by the ensemble’s progression and motion within the steady overall shape of the groove. “Four Bridges” is nicely layered, with a very syncopated and spacious lower pulse underneath a busier mid- and higher-end rhythm; starting slow and speeding up on a dime. The album’s penultimate track, “Douglass st Shuffle,” features Njoli Brown on berimbau, and the final piece, “Blanco,” starts slowly with an odd beat, and then emerges into an interesting syncopated rhythm, in which one of the drums plays with time in a manner that somehow reminded me of the way blues notes stretch away from European intervals. Taken together, these drum and percussion selections are reason enough to own this album.

However, the rest of the tracks, with tonal instruments and vocals, are quite excellent as well. The maracatu drums are always an important part of the mix. On the opener “Roda Baina,” they are in the forefront, propelling a horn-led melody that sounds like it draws from both Mexican melodies and New Orleans marching bands. As on several other songs, Liliana Araujo and Fabiana Masili provide lovely vocals. The drums are also prominent on “Quem Vem La,” perhaps my favorite track on the album, which also features call and response between the vocalists, and then between the singers and instruments, a pattern which can be heard on a number of other tracks. This piece brought back good memories of Honk!Fest for me. Other notable performances include “Voo Doom,” an ominous bluesy melody over progressions which felt like they had roots in the spirituals of antebellum days, and whose drums are lower in the mix, but just as impelling; “Dia do Cabocio,” which features a guest appearance by Jorge Continentino; and a cover of Led Zeppelin’s “Over the Hills and Far Away,” complete with maracatu drums. There are many notable individual performances on the album, but Ron Caswell‘s tuba on three tracks was for me particularly notable; he really held things down and together.

The only caveat I would make is for those who prefer drums not to play such a prominent role in the music that they listen to; this album is probably not for you, as the energetic maracatu drums are the dynamic center of the music on Baque.

For everyone else, I highly, highly recommend this album for a number of reasons. It’s a great introduction to a style of music little known outside of its home reason. It manages to take many diverse elements from the African diaspora and weave them together into a cohesive whole that still manages to wear its many influences on its sleeve. The music is played at a high level of technical proficiency, and the band is tight, but the sound feels expansive and organic, not constrictive. And most of all, the music just grabs one at a very deep and visceral level, rooted in the centuries and beyond words.

“Is America A Part Of The World?” Part 3: challenging the way we think about American and World Music!!