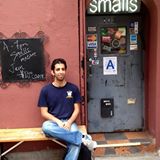 One must experience the scene at Cafe Nadery. It’s Iranian culture distilled into a small gathering place within which modern Persian intellectuals, artists, and philosophers, fiercely independent and slightly eccentric men, and impossibly beautiful women cultivate an Iranian American subculture.

It’s a perfect place for music.

Kaveh Haghtalab is an Iranian kemancheh player and drummer. He grew up listening to his parents playing Persian classical music. His mother taught him music when he was 9 and he started to play kemancheh when he was 11. He started to perform professionally at concerts and festivals in Iran with various music ensembles when he was 14. He studied under Saeed Farajpoori, Ahmad Mirhashemi, and Ostad Majid Kiani. He joined the music ensemble Center For Preservation And Research of Iranian Music. As a drummer he has worked with several groups in Iran. He holds a bachelor degree in computer engineering and studies the drums at The Collective School of Music.

At his performance at Cafe Nadery, Hahgtalab started with a solo kemancheh performance. He began with some traditional pieces. The kemancheh is an instrument that combines a primal solidity and earthiness with an ethereal delicacy. Haghtalab brought these qualities out of the unamplified instrument, deftly navigating the nuances of Persian music. He gently compelled the audience to listen, to allow themselves to become immersed in the music.

I watched people in the audience. Many were clearly familiar with the pieces he played. I did not know the songs; but the meaning behind them was clear enough. One unfamiliar with this music must experience it on a visceral level; and seek its story within ones own heart. Haghtalab deftly created this effect. He clearly understands the nature of the music and how to bring it to life within the listener’s hearts.

After a break, he returned with guest Sohrab Saadat Ladjevardi (from SoSaLa). They began with a kemancheh /soprano saxophone duet. They played one of Ladevardi’s compositions. It began with an exploration of the maqam it is based on, and while Haghtalab held down a foundation, the sax made its statement. The kemancheh commented, bringing its own offering. Then, the kemancheh gave its place to the snare drum, which Haghtalab played with brushes, while the sax danced and flew over this world.

Between thus and the next piece, Ladjevardi pointed out the sound of the AC, refrigerator; and said he heard music in it.

They continued with another of Lardevardi’s compositions. The sax took the lead while the kemancheh took its time tuning, then joined each other, as if meeting on a journey. The kemancheh took a more supportive role; largely weaving in and around the sax’s sermon like lines. Then unexpectedly, it would bring the sax in a different direction.

Then they played what can only be described as a Persian blues. The kemancheh was the more Persian of the two (and his quarter tones and neutral thirds were at times quite obvious). Ladjevardi took the lead in the performance by talking with the audience, comfortable being center stage, and making his thoughts known as part of the audience. He even led the audience in a spoken work over which the blues pulse was held by kamancheh, drum and audience hand clapping

The poetry was never missing from Haghtalab’s performance. Never. It was all poetry. This is something I learned from my own experience playing at Cafe Nadery and its largely Iranian clientele. Iranians tend to see all art and music in terms of poetry. Technical brilliance is not enough; their sensibilities veer toward poetry; and music must be passionate and romantic.

Note to musicians: if you’re playing for Iranians, bring your poetry – even if you don’t say a word. You must make everything you do poetic. You will never reach them otherwise.