Mahan Mirarab, a young Iranian guitarist (born in Tehran in 1983), is one of the young voices of Iranian jazz. In present Iran jazz is alive! The regime can’t stop young Iranians to play a style of music which is mainly about freedom…freedom of speech and expression. 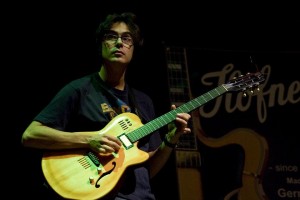 Mahan is a self taught musician, studied jazz on his own by listening, transcribing, and analyzing the music of jazz legends, such as Charlie Parker, Bud Powell, Clifford brown, John Coltrane and many more.

Besides of playing the fretless guitar he also plays the tar with which he expresses his love to Persian classical music. Jazz and Iranian traditional music are indispensable in his compositions. He’s a very sensitive guitarist and fuses the jazzy and Iranian melodies and rhythms very well.
In 2003 he formed his first band with Dara Daraeei on bass, Amin Taheri on drums and Hamzeh Yeganeh on piano. In 2008 after finishing his studies in architecture he moved to Vienna, Austria. In Vienna he started a new life as a jazz musician. Playing with local musicians and touring Europe and the US. In 2010 he released his first album The Persian Side of Jazz, in which he combined Persian folk and traditional music with jazz.

Here are two videos of a concert he had with local musicians in Tehran a month ago.

I hope that jazz music becomes more popular among the Iranian youth. With the help of jazz there’s maybe a chance for Iranians to find their own inner voices and be a platform to unite. Jazz has nothing to do with American capitalism and imperialism! Jazz is universal and the music of the underdogs!