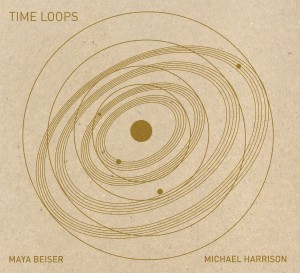 One day, out of the blue, a package arrived in the mail. It was a CD: Time Loops by Michael Harrison & Maya Beiser. I imagine being a music writer has such perks. I’m no stranger to the work of Michael Harrison (and have even had the pleasure of studying with him). So, I waited for the right moment to properly listen to and savor this latest musical offering from the maestro.

Michael Harrison is one of the most brilliant and innovative pianists and composers in America. His use of just intonation and other tunings on piano, incorporation of Indian ragas, and innovative rhythmic cycles have created unprecedented and astonishing musical works. In 1986, Harrison designed and created the harmonic piano, an extensively modified grand piano with the ability to play 24 notes per octave. His composition and CD Revelation: Music in Pure Intonation have been hailed. Harrison, a disciple of the late Pandit Pran Nath, has performed solo, and with Terry Riley, Ustad Mashkoor Ali Khan, Kronos Quartet, and La Monte Young. His compositions have consistently offered music that is both extraordinarily beautiful, and unprecedented. He has performed at venues such as at the Metropolitan Museum of Art, The Da Camera Society of Los Angeles, Centre Pompidou in Paris, Klavier Festival Ruhr in Germany, Palazzo delle Esposizioni in Rome, American Academy in Rome, Newman Center for the Performing Arts in Denver, Other Minds Festival in San Francisco, and in New York City at Lincoln Center for the Performing Arts, United Nations, Symphony Space, Merkin Concert Hall, Kaufmann Concert Hall at the 92nd St. Y, World Financial Center, and Carnegie Hall. Time Loops is Harrison’s second collection of works for Bang on a Can’s Cantaloupe Music label.

The CD begins with a three part suite “Just Ancient Loops.” Part 1, “Genesis” begins with a C drone, and just as it draws you into its hypnotic undertow, Beiser gently shatters your trance with a series of counterpoint bass ostinatos popping and cracking against the drone. This, it turns out, forms a loop over which she layers lush arco melodies. Strange and exotic landscapes and romantic scenarios are invoked as the parts bifurcate into fractal inversions into themselves. Beiser takes the listener through a fantasy world within the loops she creates and improvises against. The last note gives way to the first notes of “Part 2; “Chorale.” The joy of the first part is replaced by a somber, sad, and painfully introspective. Almost like an aged person mourning lost youth, and meditating on the inevitability of death. In an almost Beethoven-esque twist, it seamlessly morphs into a stoic resignation and acceptance of fate, with occasional tears shed in spite of the hard earned wisdom. It ending seems to look with longing and wonder into its own future. The final movement, “Ascension” begins with F played in an eighth note pattern, and adds harmonies to itself. A melody rises from this insistent movement; the former despair has burned away, and an optimistic joy has risen from its ashes. The arco and pizzicato notes dance around each other, and converse about sublime realities and higher truths. It rises and sweeps the listener to intoxicating heights, and slowly spirals earthward in a series of percussive pizzicatos, and a sustained chord in an exotic tuned harmonic has the final word.

The title track “Time Loops” (a composition merging Bach, Gounod, and Harrison) begins with Beiser’s cello in backwards loops, over which a bittersweet melody is played. Just as one is dreamily enraptured by the swirling harmonics, it ends abruptly, leaving the listener wakened form a dream.

At this point, the listener may realize that Harrison and his unique piano has so far been nowhere to be found. This question is answered by the next track; Bach and Gounod’s “Ave Maria.” A gentle piano figure is established, with the subliminal beauty of the just intonation Harrison has mastered. Beiser draws exquisite beauty from the melody. One gets the feeling that one has been privy to listening to a musical subtlety heretofore lost to the ravages of time; which Harrison and Beiser summon from the shadows of time.

Harrison’s piano begins “Spiegel Im Spiegel.” Again, the subtle way the tuning creates an interaction with the listener is very apparent. Beiser is understated; playing as part of a greater whole. Harrison’s piano, while soft and understated, seems the dominant voice here. As the piece progresses, Harrison’s part becomes more strongly stated, with Beiser offering comment now and again. It makes no demands of the listener; its overall restraint and sparse structure succeed in drawing attention to the inner beauty of the piece.

“Raga Prelude 1” is one of Harrison’s brilliant adaptations of classical Indian raga to western musical form, and his justly intoned piano. It begins with a piano figure almost reminiscent of Satie, with Beiser offering the melody. This interpretation carefully navigates the treacherous waters of mixing cultures. The intermixing of harmony with a raga structure is no small task. Some ragas lend themselves to this easier than others. Harrison and Beiser are seemingly intent upon drawing something out of this conceptual merging that transcends their polar opposites. Beiser’s melodies float and glide effortlessly over Harrison’s piano, and paint a unique picture.

The final track, “Hijaz” (another Harrison composition) features Payton Macdonald on tabla and percussion, and the Young People’s Chorus of New York City. Beiser begins with a distant sounding melody, and is answered by the chorus. They blend seamlessly; at times harmonizing, and other times creating counterpoints in the Hijaz maqam. Indian vocal bols take over, with percussion accents. An Indian taal rhythmic cycle is established, and as it reaches a climax, Harrison’s piano takes over, answering the aggression of the chorus and percussion with a stern, yet sublime poem. The cello and vocals we heard in the beginning flow in, and coalesce into a statement of pure beauty. Then, the cello and piano take on a more percussive tone while the chorus rises above it. The vocal bols, piano, and chorus dance around each other like martial artists, and then the chorus creates an ethereal dreamscape. The cello weaves in and out of their tones. The piano summons forgotten energies from the percussion and chorus. The vocal bols reassert themselves; but this time, they are not opposing the piano, chorus, and cello; they have found the means of unifying their contrasting energies. The chorus ends on a high A; and the piece draws to a conclusion.

This CD is, as one familiar with Harrison’s work, is evidence of a seemingly inexhaustible fount of musical inspiration at his command. Beiser and Harrison perfectly compliment each other’s genius, and the whole CD is a work of sublime beauty.