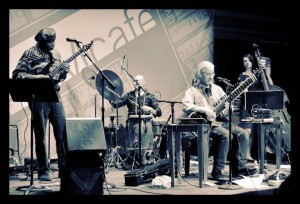 Renegade Sufi is an ensemble led by multi-instrumentalist/composer/improviser Dawoud who has performed and recorded with such artists as Lauryn Hill, James Blood Ulmer, and Nona Hendryx. Renegade Sufi plays a singular blend of sitar-based electronic jazz. The group expands upon classical raga with otherworldly electronics, hypnotic drum loops, and free-jazz-style improvisation to produce deep, trancelike grooves. Dawoud from the midwest, USA, yet a Muslim-Sufi somehow steeped in the mysticism of the Far East, carrying the Ravi Shankar/George Harrison banner into the next generation.

Joining Dawoud will be Holly Cordero (bass) and Jimmy Lopez (drums/percussion). A special guest may show up. This performance will include a brief tribute to the music and legacy of Jimi Hendrix.

Cordero started playing piano when she was five, bass at age 14, and guitar at 15. Her interest in all aspects of music has propelled her on a most interesting and fruitful musical journey. She claims to have been most inspired by John Cage and his idea that Life itself is music; and tries to capture that idea in her compositions.